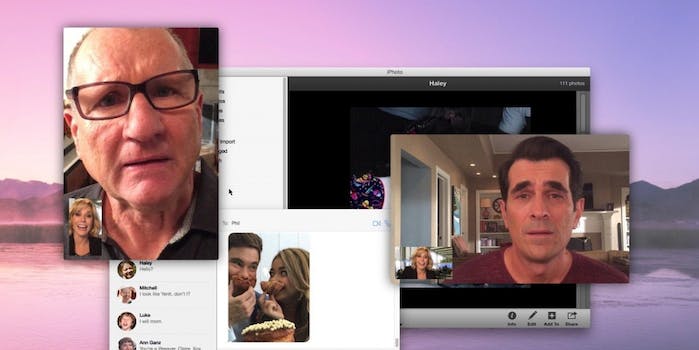 Social media might be scary in real life, but it still looks ridiculous on TV.

Modern Family will be going high-tech later this month with an episode set entirely on a laptop screen as Claire (Julie Bowen) uses every technological means she can think of to track down her daughter after an argument. The mockumentary-style television series isn’t the first to experiment with taking things online and through the screen, and it might not necessarily succeed. Life in the digital doesn’t always translate well for viewers, as evidenced by a number of fantastic flops, like Open Windows, which wasn’t exactly welcomed with opened arms.

In the case of Modern Family, there’s already a vague sense of pretentiousness, inevitable given the style. Mockumentaries can feel forced and artificial, and that’s no different here. At times, Modern Family feels deep and authentic, but at others, it feels like nothing more than breaking the fourth wall, a problem that may be underscored with this episode, which was filmed almost entirely with iPhones and other Apple products—something critics are already calling foul on, claiming the episode may end up feeling like an ad for Apple.

When deciding whether it’s even possible to pull off film and television set in the digital realm or with a heavy tech component, examining what doesn’t work is the best place to start. Understanding the obstacles that creators face when trying to adapt the digital world for live viewers can be informative, since these attempts can often feel extremely conceited and almost painful.

Such works often feel very stiff, ostentatious, and clunky. That’s coming through loud and clear with the upcoming Unfriended, for example, which is set entirely in the form of a Skype conversation taking place among a set of horrified teens.

The horror film ostensibly revolves around a humiliating video posted online and the subsequent suicide of the subject, but it’s hard to escape the fact that it feels a bit ludicrous. H. Shaw-Williams at ScreenRant writes that in the case of Unfriended, it’s clear that the social media setting is being used in an attempt to remix the horror genre and make the film stand out from the pack, and it doesn’t work: “The only thing that marks it apart from being another generic teen horror movie with a bunch of shrieking, unlikeable characters getting killed off one by one is the social media element—and even that seems a little gimmicky.”

At Badass Digest, Meredith Borders insists that the film (known as Cybernatural at the time of her review) is worth viewing, saying that “on the tiny confines of my laptop screen, alone in an unfamiliar room with earphones drowning out all other noise—damned if that execution wasn’t effective.” Even she admitted, though, that the trick might not play well on the big screen, speaking to the sense of intimacy and familiarity viewers experience when looking at a laptop in comparison with the isolation and ability to step back from a television or film screen.

Cyberbully takes place in close quarters, but it’s not as tight as the upcoming Modern Family episode or Unfriended, instead taking viewers to the room of a teenage girl who’s being cyberbullied. The film takes naked advantage of a news trend paired with a high-profile actress (Game of Thrones‘s Maisie Williams) and attempts to heighten the drama with the unrelenting pressure of never leaving the room.

Reviewers noted the predictability of the narrative, along with the after-school special nature of the setting, in which a young girl gets entangled in online bullying. At the Guardian, Lucy Mangan suggested that the film was enough to drive the viewer away from the Internet entirely, as though the Web is a frothing sea of menacing and abusive figures waiting to corrupt the innocent. Since most rational Internet users know this isn’t the case, it rather soured the story.

In Open Windows, a film with rather middling reviews (it scored a 47 on Metacritic and a 33 percent on Rotten Tomatoes), Elijah Wood stars as Nick, a man who wins a date with his favorite actress—and turns vengeful when she refuses to honor the deal. When he’s offered an opportunity to spy on her, he takes it, and the drama unfolds from there as the film vainly attempts to be a technothriller.

What makes Open Windows such a failure is that it’s so painfully an adaptation of classic revenge narratives with an attempt at drumming up attention and relevance via the conceit of inserting a digital angle. Jeannette Catsoulis at the New York Times describes it as “a thriller with so many viewpoints, feints and fake-outs that it swiftly disappears up its own URL.” At the A.V. Club, David Ehrlich had a withering review of the film: “Vigalondo’s script may not be as important to him as the gimmick through which it’s told, but the diminishing returns of the film’s means only serve to underscore its hackneyed and uninvolving ends.”

The conceit only works when it’s not a conceit, but rather an integral part of the narrative without which the story cannot happen. The classic example is, of course, The Matrix, where the digital world is woven into the film as a key component of the lives of the characters. The fact that the film is science fiction helps as well, because the bounds of believability are highly malleable and viewers expect to see high-tech aspects, while also being more tolerant of ludicrous settings.

Her, meanwhile, explored fascinating possibilities in a technological future. The tech was key to the narrative; without its elements of unlikely cyber-romance, the story would have been impossible to tell. This, again, sets it apart from attempts at dumping in the Internet, computers, or vague tech-related elements to make a production feel more relevant or interesting. Even Hackers, with its wild unbelievability, was smart enough to integrate technology into a larger live-action setting, rather than solely relying on it as a narrative vehicle.

Steven Levitan, the cocreator and executive producer of Modern Family, says this episode is drawn from his own life and how he perceives the nature of modern communication—but he almost contradicts himself when he says it’s based upon Noah, a 17-minute short exploring the same issue. The short is set entirely on social media, and reviewers couldn’t help but reference things like how it was a commentary on our “social media-addicted way of life,” tying in to the concern trolling over how people interact through digital means. Is this a real issue or a manufactured one?

This episode will only work if it can rise above what’s starting to feel like a hackneyed trope with the use of computers in television to dodge narrative responsibilities. If the story could be told without relying solely on digital means, an all-digital version will feel fake and forced to viewers.

And it’s likely that it will, because it seems improbable that a panicking mother would be relying solely on social media when she could be networking the old-fashioned way, by calling friends and family; after all, the older generation still uses phones for their intended purpose. It also seems unlikely that a woman in a state of distress who’s stuck in an airport wouldn’t attract attention and concern from the people around her, and the lack of interaction with an IRL audience will ring hollow to viewers.

Maybe Modern Family will be able to beat the conceit and produce an episode that will feel credible and authentic. More likely, though, it will fall down the rabbit hole that’s eaten so many attempts at the same narrative style before, because we don’t live in the Matrix. This is real life.