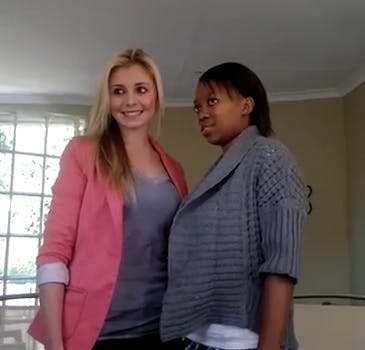 After an unflattering Twitter exchange, models Jessica Leandra Dos Santos and Tshidi Thamana did what they do best—smile for the cameras.

A pair of models from South Africa have buried the hatchet following a contentious race row on Twitter.

Jessica Leandra Dos Santos faced a storm of criticism when she tweeted a racial epithet after an encounter at a supermarket. She lost sponsorships and an FHM Model of the Year title over her remark.

Thamana has since reportedly deleted her Twitter account, which appears now to have been taken over to promote an anti-racism message. Dos Santos’s account is still available to view, though she hasn’t tweeted since posting a link to her apology blog post last week.

Mmusi Maimane, spokesman for South Africa’s opposition Democratic Alliance, invited the models to a breakfast in order to hash out their issues. The pair made up and shook hands.

“We know what we did was wrong,” Thamana said. She posed with a smile alongside Dos Santos, who apologized again.

“I do extend my sincere apologies for the incidents I caused… I think Tshidi and I will both work on getting the country back to where it was a week ago,” said Dos Santos.

The pair added that neither of them are racist and that they may become friends.

The arranged meeting between the two has been criticized by some on Twitter, with few outright positive comments.

“Thamana and Leandra, sitting in a tree, staring at each other ever so awkwardly,” Simon Tamblyn commented .

The issue might not be completely buried yet, though. Several people submitted complaints about the pair to the SA Human Rights Commission, and they may face legal action over their tweets.