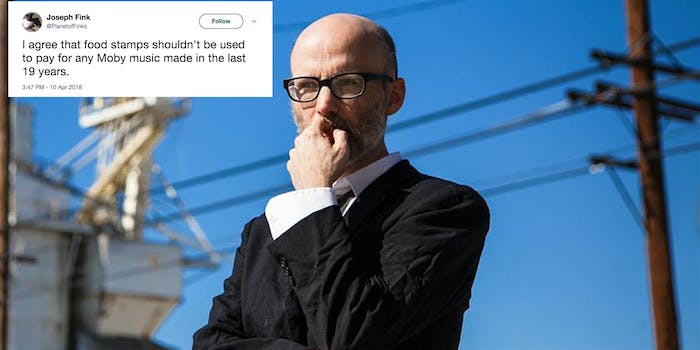 'Wow Eminem was right about Moby.'

Moby—musician, DJ, and vegan restaurant owner—apparently has a lot of opinions about what people should eat. Specifically poor people. In an op-ed for the Wall Street Journal that was published on Sunday, he argues that the Supplemental Nutrition Assistance Program (SNAP) should support only healthy food. He suggests that SNAP shouldn’t pay for processed food like meat and cheese, or junk food like candy.

I won’t listen to moby talk about junk food pic.twitter.com/rZCzcqQs8d

Congratulations to Moby on his new fellowship at the American Enterprise Institute pic.twitter.com/d7Y7GWXSdn

I agree that food stamps shouldn't be used to pay for any Moby music made in the last 19 years.

Hey, Moby here, the bald weakling who looks like he’d have psychic powers in an anime — anyways, here’s some nutritional advice

Many criticized Moby for wanting to make the lives of poor people even more difficult:

Although Moby grew up with a mother who used food stamps, he didn’t seem to see that it was a bad idea to tell poor people what they should eat.

In this passage Moby talks about the shame that can be felt when poor but doesn't seem to understand that having your diet dictated to you because you're poor could/would make folks feel shame/humiliated. pic.twitter.com/91lbxN3QYh

The op-ed also reignited the internet’s interest in the long-running feud between Moby and Eminem. Although Moby spoke highly of the rapper in a Reddit AMA a few years ago, the internet seems to think that Eminem has now won.

Wow Eminem was right about Moby