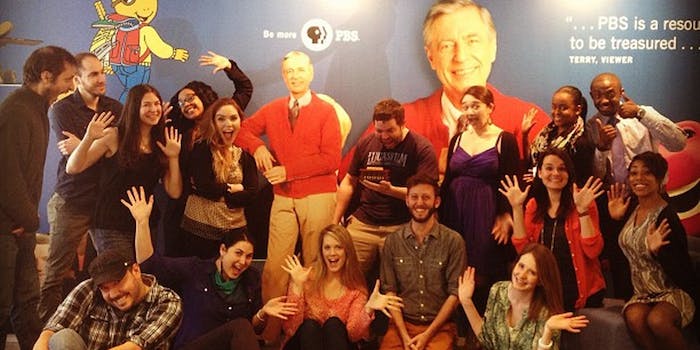 America's favorite neighbor, Mister Rogers, would have been 85 today.

Fred Rogers—or, as many of us knew him on our TVs over the years, Mister Rogers—welcomed us into his home every day with a gentle, soft-spoken voice and familiar cardigan sweater on Mister Rogers’ Neighborhood, which ran from 1968-2001.

He would have been 85 years old today.

Along with hosting the popular kids’ show, he was an educator, Presbyterian minister, songwriter (he penned many of the tunes that appeared on Mister Rogers’ Neighborhood himself), and author. He passed away in 2003 after a battle with stomach cancer, but reruns of his show would run on PBS for years after his death.

In honor of Mister Rogers’ birthday, PBS released the Rogers family corn pudding recipe. He shares a birthday with another beloved PBS staple, Big Bird, and it’s fitting (although probably coincidental) that the first annual International Day of Happiness falls on March 20th, too.

While Mister Rogers may no longer be on the air, he is still remembered online and on YouTube, where clips portraying his message are still passed around to this day—and even xkcd’s Randall Munroe can’t be cynical.

To commemorate Mister Rogers’ birthday, the Daily Dot has curated five videos to remind each of us to make each day a special day just by being ourselves.

1) Mister Rogers Intro Over the Years

Throughout the span of 43 years, Mister Rogers always started the show the same way: with a song. He would enter his home at the beginning of every episode, take off his coat, put on a cardigan, put on a comfortable pair of shoes, and invite us to be his neighbor in a comforting tone. The routine barely changed during the history of the show, but that song and invitation never got old.

Gov. Mitt Romney wasn’t the first to suggest going after PBS’s funding. Mister Rogers, then relatively unknown, appeared before the United States Senate Subcommittee on Communications in 1969 to support funding for PBS. He spoke for about six minutes in his usual manner and argued that programming like his show helped children. After he finished speaking, John O. Pastore, the subcommittee chairman, told Mister Rogers, “I think it’s wonderful. Looks like you just earned the $20 million.”

Some people may be too young to remember Mister Rogers, or don’t know much beyond what we’ve seen on television, but you can quickly find out more with this list of facts to mark his 85th birthday courtesy of Mental Floss and John Green. Throughout his life, the real Mister Rogers was almost exactly the man who appeared on TV every day.

PBS Digital Studios teamed up with Symphony of Science’s John Boswell in June to immortalize Mister Rogers’ message in an auto-tuned remix. He assured us in this catchy tune that it’s actually okay to be curious and grow ideas in the garden of your mind, a message that another remixed PBS icon, LeVar Burton, would pass on in his show Reading Rainbow.

Mister Rogers’ Neighborhood received four Emmy awards during the course of its run, and in 1997 he was given a Lifetime Achievement Award. Introduced by Tim Robbins, he asked the audience, who just gave him a standing ovation, to be silent for 10 seconds so they could think about the people who helped them become who they are. And they did.