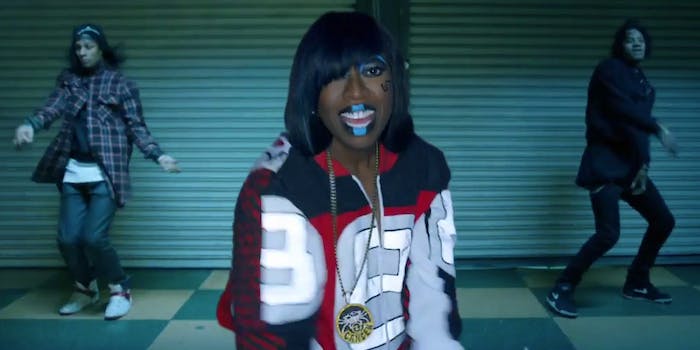 Mary is that friend at karaoke.

She’s also an avid Missy Elliott fan, as evidenced by her absolutely stunning rendition of “Work It” during an outdoor “Kool Kat Karaoke” sesh.

Halsey posted a video of herself singing the rap hit online to Facebook, and she absolutely blew everyone away. There’s booty-shaking. There are tons upon tons of sass. Most importantly, Halsey belted out every single word of every verse, including the sound effects. Queen of making elephant noises. Queen of speaking backward.

If you’re a fan of the song, every time you sing along to “Work It,” you probably also try to pronounce the backward “I put my thing down, flip it, and reverse it.” It sounds something like “ishyerrfremmanippaswenyaaapa” and should be repeated twice. Halsey has it down.

“Missy’s funky white sister,” as Mary called herself, didn’t hold back, and this video is a beautiful gift to the internet.

We’re not sure what’s better—this talented Missy fan belting out word-perfect verses or her friend in the background who’s tip-toeing around to the beat while chowing down on some ramen noodles.

The karaoke bit didn’t go unnoticed, either. Missy Elliott took note of Halsey’s serious skills and posted it on her Twitter account for the entire world to see. The verdict? She loves it. Especially Halsey’s tip-toeing buddy.

Looks like the video is continuing to make the rounds, too. Even Jada Pinkett Smith took to Instagram to give Mary some love.

Everyone else? Oh, they’re here for it.

Me too. The ol Snack n Step

“That’s what we need more of!” yelled out one of the bystanders at the end of the performance in the video.

Can we come to the next karaoke event and let Mary show us how it’s done?