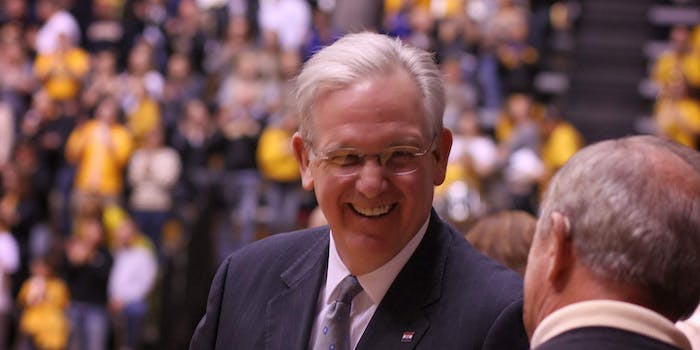 Before he got around to discussing the lockdown of Ferguson, the governor took time to tweet about the state fair.

The Missouri governor’s office has finally issued a brief statement tonight about the Ferguson protests that have shut down the city and captured the attention of the world.

“The worsening situation in Ferguson is deeply troubling, and does not represent who we are as Missourians or as Americans,” Nixon stated according to local news reports.

While we all respect the solemn responsibility of our law enforcement officers to protect the public, we must also safeguard the rights of Missourians to peaceably assemble and the rights of the press to report on matters of public concern.

I have been closely monitoring the situation and will continue to be in communication with local leaders, and I will be in north St. Louis County tomorrow. As Governor, I am committed to ensuring the pain of last weekend’s tragedy does not continue to be compounded by this ongoing crisis. Once again, I ask that members of the community demonstrate patience and calm while the investigation continues, and I urge law enforcement agencies to keep the peace and respect the rights of residents and the press during this difficult time.

The statement came after a series of highly criticized tweets from the governor earlier this evening.

But none of that was as important as the Missouri State Fair—or so it seemed to Twitter tonight when Governor Jay Nixon finally broke days of social media silence to update.

Canceling all appearances at the @MoStateFair to visit North #STL County tomorrow. Statement to follow.

As you might expect from a national social media feed that seemed glued to the events in Ferguson Wednesday night, this bizarre framing of the situation sparked outrage among Twitter users.

@GovJayNixon Gosh, that’s so sweet of you.

About 90 minutes later, around the time of his official statement, Nixon followed that tweet up with a series of tweets that appeared far more concerned.

Situation in Ferguson does not represent who we are. Must keep the peace, while safeguarding rights of citizens and the press

As Governor, I’m committed to ensuring pain of last weekend’s tragedy does not continue to be compounded by this ongoing crisis. #Ferguson

Though more forceful than the preceding ‘state fair’ tweet, these caused Twitter users to wonder why Nixon wasn’t simply stepping in and ordering the state police to back down, rather than just “urging” them to do so.

@GovJayNixon @FOX2now you forgot to tell your police officers that…. Absolutely disgusted by you and your officers

Hey @GovJayNixon DO SOMETHING LIKE HOLY SHIT YOU COWARD!?

Onlookers also criticized Nixon for failing to actually name concrete action to protect protesters and the media from unlawful arrest.

@GovJayNixon and the steps you’re going to take to stop attacks on the press are … We’re waiting.

Finally, Twitter denizens castigated Nixon for his slow response. With the Ferguson lockdown protests and subsequent lockdown now entering its sixth day, many were frustrated with what they perceived as his silence up til now.

On Monday, Nixon called for a federal investigation into the death of Michael Brown, the unarmed teenager whose death at the hands of an unnamed Ferguson police officer Saturday sparked the riot. On Tuesday, he also delivered remarks to community leaders in North St. Louis, noting that “as a father of two sons,” he’d “done a lot of praying over the past few days.”

But prayer isn’t satisfactory to many community members. After the governor’s tweets, NAACP member John Gaskin III told MSNBC that the governor’s absence earlier in the week “really says what his priorities are.”

It seems that five days and an escalation of arrests later, the expedient moment has arrived—for Nixon, at least.

Meanwhile, attention is starting to turn towards another political figure who U.S. citizens seem to be perceiving as an absent figurehead:

What alternate reality is Obama living in? #Ferguson pic.twitter.com/cnMKfeBSYo

It looks like the president won’t have much to dance about the rest of the week.