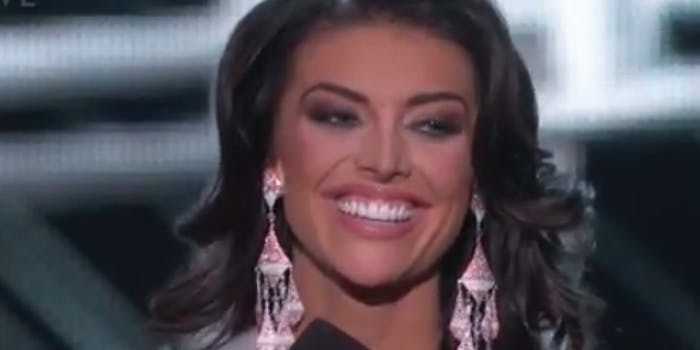 The response to Miss Utah 2013 Marissa Powell's fumbled question has been cruel, hurtful, and symbolic of a larger issue facing young women.

Last night, Miss Utah 2013 Marissa Powell fumbled a question she was given on income inequality between genders, and the Internet reacted with vindictive glee.

Powell was obviously nervous speaking in front of so many people live and on national television. She was asked by Nene Leakes: “A recent report shows that in 40 percent of American families with children, women are the primary earners, yet they continue to earn less than men. What does this say about society?”

Powell replied: “I think we can re… relate this back to education, and how we are…continuing to try to strive to… figure out how to create jobs, right now. That is the biggest problem in… I think, especially the men, are, um… seen as the leaders of this, and so we need to try to figure out how to… create education better so that we can solve this problem.”

The response to Miss Utah Melissa Powell’s flub has been absurdly predictable: She’s been resoundingly criticized in blog posts, mocked on Twitter, and news items of the Las Vegas event mention Powell’s botched answer before the name of the woman who actually took the 2013 crown. Comments on posts about Powell are filled with cretins who love having a new victim to mock for being exactly what our patriarchal society and impossible beauty standards have wrought.

More than two years ago, I published a personal essay, “I Am the Smart One, She’s Just My Sister,” in which I chronicled the times throughout our childhood that my younger sister and I were split into the dichotomy of “the pretty one” (her) and “the smart one” (me). Over the years, resentment grew between us as women: I believed because I was smart, I could not also be pretty. In that insecurity, “pretty” became something to deride. She believed because she was pretty, she could not also be smart. She therefore focused her energy on clothing and spray tans and manicures. I wrote, “We’d both been done a disservice by people who think young women can only be one or the other: smart or pretty. This is what you are forever. You can never, ever be the other one.”

This is exactly why people, collectively, feel giddy whenever a beauty pageant contestant reveals herself to be less eloquent than a presidential candidate. We cannot abide by a woman being both beautiful and intelligent, and in our insecurity and jealousy, we are given something to mock.

Powell is 21 years old. All her life she’s been praised for her beauty to the point that she may have neglected her education. Or the girl got nervous speaking in front of all those people. Or she was so thrown by the hilarious irony of someone from The Real Housewives of Atlanta asking about income inequality. It happens.

We’ve all choked in our lives, and we can’t control what Powell did. What we can control is our reaction to it. We need to examine why we’re so delighted by these pretty women’s mistakes. It benefits no one to continue to tell women they can’t be both beautiful and smart, to the point that when it’s shown to be “true” we toss confetti in the air and feel superior.

This isn’t the first time a video of a beauty pageant contestant messing up an answer on national television has gone viral. Miss South Carolina Caitlin Upton seems to have a stroke in the Miss Teen USA Pageant 2007 when asked why a good portion of Americans can’t locate the U.S. on a world map. The eff-up got her on The Today Show, Jimmy Kimmel Live, and led to her “Web redemption” on Tosh.0.

Miss California Carrie Prejean was ripped to shreds two years later for her homophobically tinged and narrow-minded answer to Perez Hilton’s question about gay marriage. Prejean made little to no sense, rambling that because she was raised by a man and a woman, marriage should be between a man and a woman. (She also coins “opposite marriage” here.)

We love it when beautiful women mess up because it throws down the perfectly crafted curtain and reveals that behind veneers and make-up, they are flawed. The pedestal comes crashing down. “I knew it!” we shriek, delighted. “I knew someone couldn’t be both pretty and smart!” Then, we feel good for not being beauty queens. Our jealousy turns into smirking smugness. It’s schadenfreude, and it’s ugly.

People are more than just one thing. Many of these beauty contestants do tons of charity work and have complex backgrounds and lives. (For instance, Miss Utah has a very sick brother with both an inoperable brain tumor and congenital adrenal hyperplasia, and she volunteers at a local hospital and as an ambassador for the foundation Healing Hands for Haiti.)

Most of the vitriol comes from other women. What’s disturbing is the idea that we should celebrate someone’s misfortune, and that because that person is pretty and has dared to tried to make a living off that, she deserves everything bad she gets. This black-and-white narrative has to change. It’s why children like myself and my sister thought we could only be one or the other: pretty or smart.

In her answer, Powell said, “We need to create education better,” and while that’s not the most poetic way of phrasing that, she’s right. And she’s a perfect example.