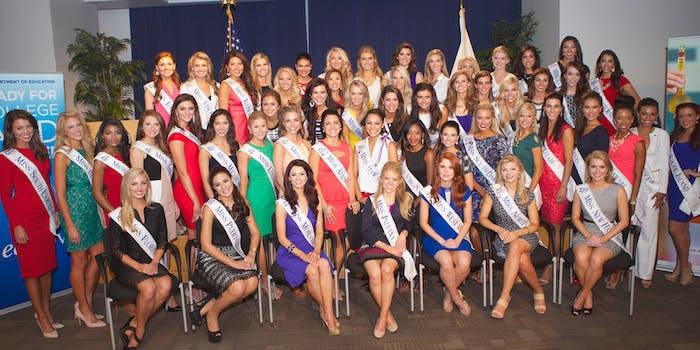 Who said it: Donald Trump or Miss USA?

These girls sure are terrible.

The Miss America pageant is in a crisis. Its outspoken owner, Donald Trump, casually referred to Mexicans who come to the U.S. as “killers and rapists” in a speech announcing he’s running for president, and the two major television networks who cover the event, NBC and Univision, cancelled their contract with him.

But that’s nothing compared to some of the outbursts from Trump, who, it’s worth remembering, is polling second among Republican candidates. So in memoriam, we’ve put together a quiz. Can you tell whether a Miss USA contestant or Trump gave these monumentally terrible sound bytes?

Q. Each day, the Internet becomes a more powerful tool to touch people around the world. What kind of social media service are you best at, and why?

A. My Twitter has become so powerful that I can actually make my enemies tell the truth.

Q. Americans these days are becoming more and more concerned with the ethical shopping. What’s one choice you make about how to spend your money, and why?

A. [People] who believe in tight border security, stopping illegal immigration, smart trade deals with other countries should boycott Macy’s.

Q. Do you have your own personal website, and if so, did you code it yourself?

A. I have so many websites. I have them all over the place. I hire people. They do a website. It costs me three dollars.

Q. Now, [contestant], you’re heavily involved with Habitat for Humanity and building homes and structures for the less fortunate. What’s your dream project?

Q. With a population greater than any other country and a surging economy, China is poised to be a major world player. How can we do to work with China to see a brighter future for all?

A. I’m not saying they’re stupid. I like China… Their leaders are a lot smarter than our leaders. It’s like, take the New England Patriots and Tom Brady and have them play your high school football team.

Q. Winners of the Miss USA pageant often go on to change the world. Where do you see yourself in 10 years?

A. I will be the greatest jobs president that God ever created.

Photo via US Department of Education/Flickr (CC BY 2.0)