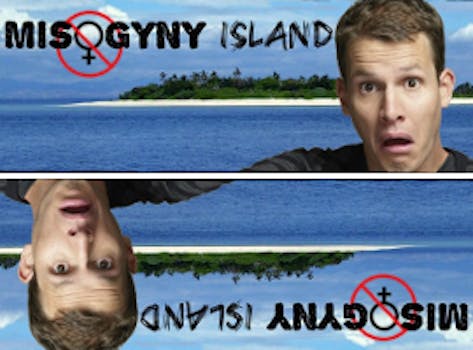 Choose your own sexist adventure on Misogyny Island

The object of the satirical web game is to be named the Uber Misogynist.

Heads up to any trolls needing to brush up on your skills before sounding off against Anita Sarkeesian or her ilk: Now you can do it with a choose-your-own-sexist-adventure game! Misogyny Island is a new satirical web game that lets players don the role of contestant in a reality TV show where the winner gets to be the Uber Misogynist.

As the game explains, the winner gains “the right to stay on Misogyny Island forever so that you never have to engage in a meaningful interaction with a woman!” And the host? None other than rape-jokes-are-funny comedian Daniel Tosh.

The game, which debuted March 9, seems written to coincide with the release of Sarkeesian’s Tropes vs. Women in Video Games series. From the first scenario:

xXxSniperKill420xXx says, “Hey, that feminazi chick released her first video about ‘sexist’ tropes in video games. She’s complaining about ‘damsels in distress.’ If feminism is about protecting women, why does she hate it so much when games encourage you to protect women? Totally illogical!”

You ponder his thoughtful comment and respond by saying (select one):

A2 “Yeah, I’m not sure that’s exactly what ‘feminism’ means but I agree that she is pretty dumb.”

A3 “Actually, there are some differences in context here. Feminism is a movement in which women advocate for their own rights and freedoms, making concrete political gains that make the world a safer and more equitable place for other women. Media representation is an entirely different issue. The (typically male) player is encouraged to feel a paternalistic sense of ownership over the female characters that he protects. While everyone needs to be rescued at some point regardless of their gender, this persistent trope highlights the ways in which women are perceived to lack agency and control over their own lives.”

It’s easy to see which answer is the “right” one. The “wrong” answer gets you immediately voted off the island, because you “confessed to having once talked with a female gamer on Xbox Live as if she were a human rather than an animal.” (The middle answer just causes the other contestants to suspect you might be gay.)

In the guise of letting the “contestants” become Twitter trolls, the game castigates the online behavior of self-identified “Men’s Rights Activists” and other groups such as the ones that have harassed Sarkeesian to the point where comments on her TED talk as well as her own videos had to be disabled.

The authors of Misogyny Island are Fred McCoy, Kat Haché, and Samantha Allen. McCoy is a photographer/designer and the owner of design magazine Creative Fluff. Allen is a graduate student in gender and sexuality studies. And Haché is a self-described “tranarchaqueer feminist” and artist.

The content of the game seems heavy on sarcasm and light on substance. At one point, two contestants return because they “were voted ‘Dude’s Choice’ in an Xbox Live poll sponsored by Axe Body Spray.” Since the answers are predictable and the non-asshole answer gets you immediately kicked off the island and the game, there’s nothing really educational about the process that the game takes you through–especially since the actual misogynists who might need the game’s message the most will probably quit at the word “misogyny.”

For those who soldier on, however, there may, perhaps, be some glimmers of enlightenment:

You feel self-doubt creeping in. What if women are in fact human beings? You shudder and remove the thought from your mind.