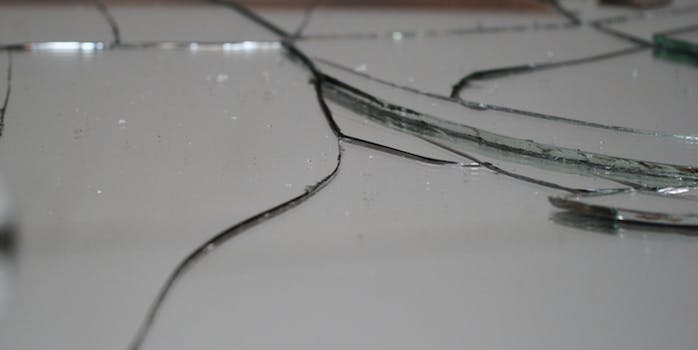 The world is bad. How do we make ourselves feel better? We could volunteer for a charity, or spend time with loved ones, or change our Facebook profile pics in support of a vaguely defined cause.

Or we could while away the garbage hours watching YouTube videos of people smashing mirrors.

These brave humans risk seven years of bad luck in pursuit of a big ol’ smashy crashing noise, and we should thank them. Mirror destruction is better stress relief than therapy (not to mention significantly cheaper), something like the polar opposite of the ASMR trend. I’ve scoured the Web for the best mirror-smashing YouTube has to offer. Make sure you have The Who’s “Smash The Mirror” playing in the background while scrolling.

This first video has a lovely abstract quality reminiscent of the Craigslist Mirrors tumblr. A reflected sky with puffy clouds. Then, the revelation of a disembodied hand bearing a hammer. All is shattered, the sky reduced to slivers. The video upload date is Sept. 11, 2012. Coincidence?

While many mirror-smashers take proper precautions, wearing things like safety goggles and protective gloves, this hero eschews any such frippery. He hates mirrors so much he wants to kill one with his bare head. And who could blame him! As he reveals just before impact: “I recently found out this is who my girlfriend’s been cheating on me with.”

These fellows are a proper demolition crew, but their video stands out for a neat bit of misplaced patriotism. They decorate the doomed mirror with photos of Osama bin Laden before smashing the shit out of it with hammers and pipes. That’s catharsis, so long as you don’t think too long or critically about the unintentional metaphoric effect of covering your own reflection with a headshot of a fearsome terrorist.

This baseball-hatted patriarch gets props not only for selecting the best possible mirror-smashing tool (pipe wrench, obviously), but also for his impeccable overhanded pitching form. Good job, dad!

A young weightlifter, triumphantly hoisting what looks like a 100-pound bell bar, drops the weight to the ground, where it rolls with perfect comic timing into the unsecured full-length mirror. A wall full of weightlifting idols frowns upon the white space where it once was as the weightlifter screams his frustration into the night. This is not the first time, nor will it be the last. Those who forget mirror history are doomed to repeat it.

This is a pretty minor smash, as far as smashes go, but the video stands out for its ominous soundtrack. Dude seems to have chosen to do his mirror smashing on a rainy pier, surrounded by a thousand squawking seagulls. At the moment of destruction, the seagulls raise their voices in hellish chorus that is half requiem, half threat of bloody retaliation. Nature abhors a reflection.

Here I was going to include the pièce de résistance, a treasure trove of destructo-vids produced by a trio of preteen boys calling themselves “SmashBrothers1452.” The Smash Brothers break not only mirrors, but also karaoke machines, light bulbs, VHS tapes, a 1950s radio, a laptop, a big plastic squirrel, and “a huge spider.” Alas, SmashBrothers appear to have taken down their entire cache of videos, leaving me bereft. The brother-sister duo “We Destroy Toys” provide some measure of comfort, but never reaches Smash Brother levels of unbridled demolition joy.

Perhaps one day The Smash Brothers will return with the zest for demolition we so desperately crave, but until then, we can only live in their spirit. I leave you with the description from their YouTube channel: “This channel is all about destruction, and if you like destruction then watch these vids and leave a sub.”

If only the rest of life were so simple.