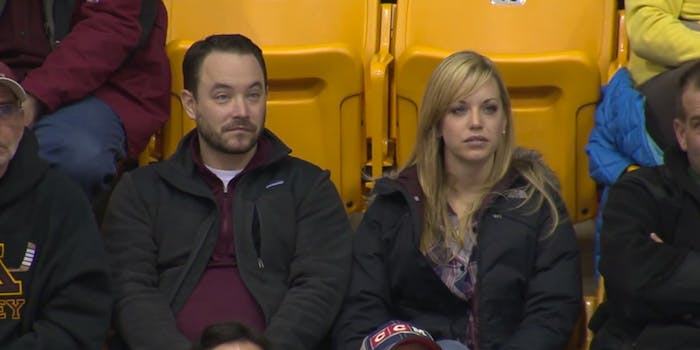 This guy has a simple, brilliant way to avoid the kiss cam

Well, that’s one way to get out of kissing on camera.

The kiss cam is a staple at almost every sports game, where it shows couples sitting around the stadium kissing and showing displays of affection, whether or not they want to. Even President Obama has been subjected to the kiss cam, and he and Michelle Obama received boos from the audience for not partaking in the tradition the first time they were featured on camera.

But what happens when the person you’re on camera with isn’t someone you’re dating?

One attendee and his sister were at the Minnesota hockey game against Michigan when the kiss cam landed on them Friday night. They didn’t pull a Jaime and Cersei Lannister, but luckily, he had a handy solution.

According to Minnesota assistant director of athletic communications Brian Deutsch, the brother asked to be shown on the kiss cam but had no idea what he planned to do.

And if you never want to actually perform on a kiss cam, you have a great way to get out of it.