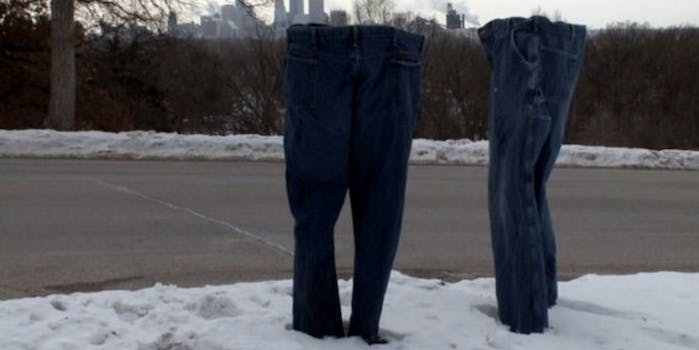 Minneapolis has been overrun by frozen pairs of pants

It's a little creepy—but way cool.

Enduring the cold can be a bummer, especially in a northern state such as Minneapolis. But one guy managed to still have a little fun regardless of the consistently frigid temperatures.

Tom Grotting is famed in his Minneapolis neighborhood and around the city for a pretty clever prank that was recently featured on an “I Love NE Minneapolis” Facebook page: posing and freezing pants. It’s simultaneously bizarre and comical—after all, imagine just walking around, minding your own business, and suddenly you come across two upright pairs of jeans? Chances are you’d be a little freaked out. 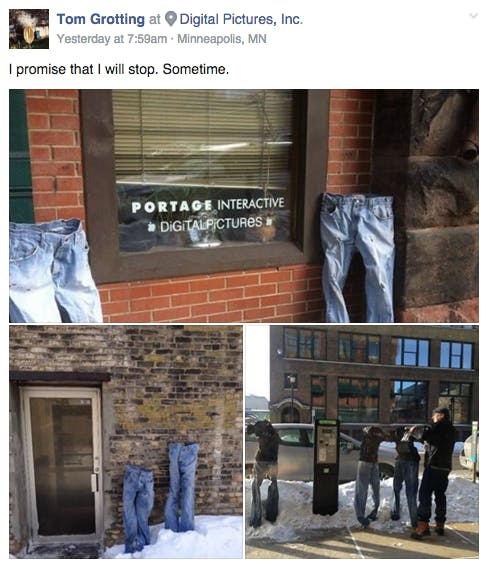 How does Grotting get his pants to stand upright like that? Well, he soaks the pants in a bucket of water and then hangs them outside, shaping them as they freeze. It takes fewer than 30 minutes.

Grotting began freezing pants a few years ago, when a Polar Vortex left Minneapolis much colder than usual. “It was just on us for weeks on end so I took advantage of the Polar Vortex and froze some pants,” Grotting told Good Morning America. “You can usually wear them again—it’s not unlike washing your clothes—but in this case they ended up getting kind of ratty because I kept doing it.”

People outside of Minnesota think our frozen pants are "creepy." https://t.co/7T4sBsc5C4 pic.twitter.com/pEwUHBmDsS

Ever since Grotting’s ingenious idea went viral, many people in Northeast Minneapolis have been freezing their pants, too. Expect a swarm of upright Levis to take over the entire state by February.