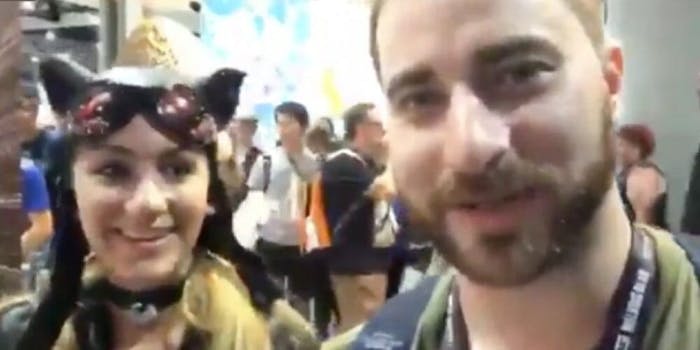 Watch the dude who allegedly maced himself in Charlottesville fail at being human.

Tim “Baked Alaska” Gionet, the former redneck rapper who rebranded as a pro-Trump agitator and “alt-right” personality during the 2016 election, hasn’t been having a great time lately. He got maced—or, allegedly, maced himself—at the Charlottesville white supremacist rally, had his iPhone broken by a woman he was trying to film, and apparently hit on a 13-year-old girl at a comic book convention. The awkward part is that “Baked” films all these things himself and puts them on the internet. And now there’s a site that wants to make sure they stay there forever.

A new site called Milkleaks has been collecting and posting the best (read: worst) excerpts from Baked Alaska’s videos. (The name comes from Baked Alaska hollering “I need milk!” during the pepper spray incident.) It’s registered to Nathan Bernard, the creator of a brilliant anti-“alt-right” Twitter bot, and it’s been heavily promoted this week by Super Deluxe video editor Vic Berger IV.

Milkleaks distills Baked down to his essence: a guy who just seems to want attention, no matter how negative. When Berger tweeted out some of the videos—including the comic con incident—they were removed from Twitter via copyright takedown, presumably by Baked himself. They live on via Milkleaks, though.

Here’s the beginning of the iPhone incident, where Baked Alaska insists on his right to film a woman until she finally becomes fed up and breaks his phone.

And here’s the incident at comic con where Baked Alaska jokes about grabbing a Catwoman cosplayer’s “pussy,” then tries to get her number. She then tells him that she’s 13, and the man she’s with (her dad?) backs her up by giving her birthdate. It’s not a great look for Mr. Alaska.

Since the launch of Milkleaks, Baked’s collected works (look upon them and despair!) have received negative press coverage from likes of Bustle, Death and Taxes, and the A.V. Club (who called him “the internet’s saddest neo-Nazi loser.”) Comedian Patton Oswalt also enjoys the site:

There is nothing sadder or funnier than @bakedalaska, the Col. Klink of the neo-Nazi movement. https://t.co/yHzLZug06C

Baked has no one but himself to blame, though: He’s the one who put the videos online in the first place. This is truly a self-own for the ages, one that no amount of milk can wash out.

He’s taking the whole thing in stride, however. After all, fame is fame, right?