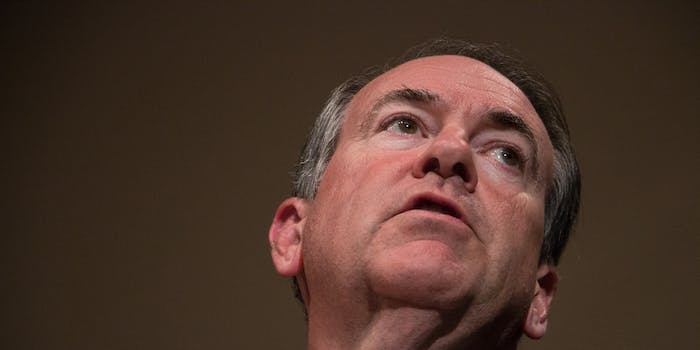 Being an Also Ran can be very profitable.

Shortly after Mike Huckabee ended his campaign for president in 2008, he began another career—this time as the host of his very own show on Fox News. If you want to understand Huckabee’s reason for making a recent entry into the 2016 race, you must start by recognizing that being an Also Ran can be very, very profitable.

After all, Huckabee’s chances of actually winning are quite slim. “Mr. Huckabee would seem to face greater obstacles than during his first presidential campaign, when he battled only a couple of rivals for the party’s conservative base,” writes Trip Gabriel of the New York Times. “Now half a dozen or more declared and likely candidates appeal to social conservatives, and Mr. Huckabee’s party has moved further rightward.”

If his vulnerabilities among the GOP’s conservative base weren’t damning enough, he is also damaged by his own checkered history when it comes to espousing ideas that are (to put it generously) controversial:

These tweets demonstrate that the Internet is very much aware of Huckabee’s past views on gay rights, such as quarantining AIDS victims and supporting legislation permitting discrimination against gay people, as well as his paranoid Christian agenda in general. (Remember that time he claimed the American government was trying to criminalize Christianity?) Although presidential nominations are snagged by appealing to one’s party base, general elections are won by winning over the center, and considering that the American center opposes the injection of religion into politics, Huckabee’s very political brand guarantees his own unelectability.

If you want to understand Huckabee’s reason for making a recent entry into the 2016 race, you must start by recognizing that being an Also Ran can be very, very profitable.

Naturally, one must wonder: Could Huckabee really be deluded about his own chances of winning? If not, what possible reason could he have to enter the campaign?

“Huckabee is one of a number of people who have managed to make a career out of staging one long, endless, futile presidential run,” explains Drew Magary of GQ.  “If you have enough money, a few rich benefactors, and a handful of bafflingly stubborn constituents, you can usually cobble together a campaign that is doomed to fail, but deliberately so.”

Politicians from both parties indulge in this practice. Rudy Giuliani earned more than $9.2 million in speakers fees in the year before his 2008 presidential campaign, while Hillary Clinton has been to known to accept as much as $200,000 for individual speaking engagements since her tenure as Secretary of State came to a close.

Other pricey Also Rans include Al Gore, whose agency requires him to be compensated “$100,000, plus travel, hotel, security, and per diem expenses”; Mitt Romney, who has averaged between $40,000 and $60,000 per appearance since his unsuccessful 2012 campaign; and Howard Dean, who has been paid $20,000 for speeches as short as 10 minutes in duration.

Nor is it merely speaking that can rake in the cash for an erstwhile presidential contender. A study by the University of Minnesota’s Eric Ostermeier determined that Sarah Palin—who voters with good memories may recall toyed with a presidential bid in 2012 before being snapped up by Fox News—earned $3 million during her three years as a commentator there, averaging out to $15.85 per word.

Though not earning nearly as much as Palin, many political observers theorized that Huckabee decided against running for president in 2012 because he’d have to give up the $500,000 annual salary from his show.

Dr. Lance Strate, a professor of communication and media studies and associate chair for graduate studies at Fordham University, argues that former presidential candidates can successfully demand egregious sums of money because they have star power. Strate told the International Business Times, “For some, there is the basic interest in being associated with a celebrity, the prestige that comes with the presence and participation of a famous and influential individual.”

Hillary Clinton has been to known to accept as much as $200,000 for individual speaking engagements since her tenure as Secretary of State came to a close.

The digital age has only exacerbated this trend. “Throughout modern campaign history successful candidates have tended to outpace their competitors in understanding changing communications,” explained a 2012 Pew Research Center study on Web and social media use during that year’s presidential election. This ranged “from Franklin Roosevelt’s use of radio, to John F. Kennedy’s embrace of television, to Ronald Reagan’s recognition of the potential for arranging the look and feel of campaign events in the age of satellites and video tape.”

Whereas previous technological advances merely extended the reach of a candidate’s message, however, the Internet allows them to remain in the public eye as long as they can generate headlines on Twitter. Candidates who are able to flourish in this climate may not have demonstrated an ability to effectively serve in public office, but they certainly prove something else entirely—namely, that they are marketable commodities.

While it’s bad enough that former politicians have the ability to so egregiously cash in on their fame, the more-likely-than-not phony campaigns of candidates like Huckabee take the problem of money corrupting politics to a whole other level.

Aside from the questionable fiscal ethics of conjoining a bid for elected office with one’s personal financial agenda, running for president simply to make money later distorts our democratic discourse. Every candidate who campaigns insincerely takes time, money, and attention away from those making good faith bids for power. Even worse, when a genuine candidate and a mercenary one have overlapping constituencies, the unelectable alternative can take votes away from the option who could realistically advance the cause of his or her constituents.

In the case of candidates like Huckabee, the toxicity of their cause is in its own right a problem.

Of course, in the case of candidates like Huckabee, the toxicity of their cause is in its own right a problem. Despite the enormous strides made in recent years on issues like gay rights, there are still many Americans who wish to make a political crusade out of denying basic civil liberties to men and women with different sexual orientations.

Even though he won’t become president, and is unlikely to be the Republican nominee, Huckabee’s candidacy will still serve as a focal point for anti-gay bigots throughout the country, giving them an outlet to exercise (at the very least symbolic) electoral power. To play this role sincerely is deplorable; to do so with the primary goal of making money is even worse.

At some future date, a historian studying the early 21st century may look back at the hucksterism of men like Mike Huckabee and wonder how he got away with it. For now, unfortunately, we have to live with yet another doomed campaign.

It’s going to be a long election season.

Matt Rozsa is a political columnist and Ph.D. student in history at Lehigh University. His editorials have been published on Salon, the Good Men Project, Mic, and MSNBC.