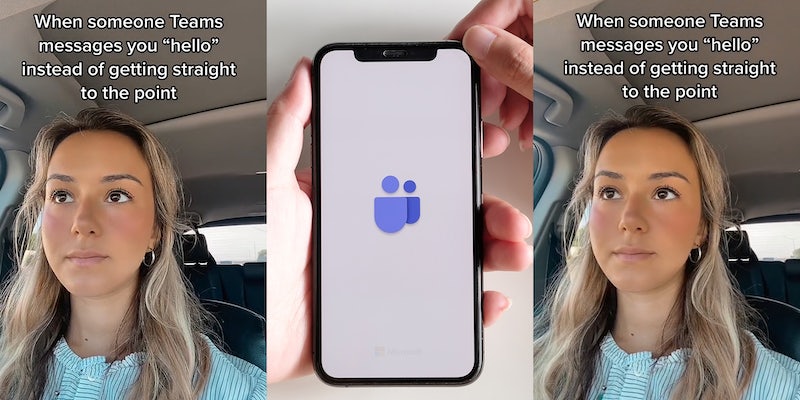 ‘I just don’t respond’: Is it OK to message co-workers with a simple ‘Hello’ on Microsoft Teams? The question is sparking debate

'And then you have to stare at them typing for an eternity.'

Workplace etiquette is a tricky thing. In a viral TikTok about Microsoft Teams, TikToker @engineerlexi raised a surprisingly divisive question: Is it OK to message your co-workers with a simple “Hello?”

Captioned, “When someone Teams messages you ‘hello’ instead of getting straight to the point,” this reaction video shows the TikToker staring blankly into space while a screaming sound effect plays in the background.

As it turns out, a lot of people share her opinion, agreeing that it is very annoying to receive a context-free “hello” message from a co-worker.

Some people find this messaging strategy stressful because the recipient has no way of knowing if they’re about to hear bad news—especially if the message comes from a manager. However, the most common response is plain old annoyance, because a “hello” message is seen as a waste of time. Microsoft Teams isn’t a social app, it’s a work tool, and a lot of people would prefer that their co-workers just get straight to the point.

“I just don’t respond,” reads one of the top replies. “It’s surprising how many problems go away at work if you just ignore people.”

Others agreed, chiming in with comments like, “Pet peeve. You better put what you want right after hello or I am never answering you,” and, “If you don’t start with what you want to say then it’s probably not important.” Even the official Microsoft 365 account responded, joking, “and then you have to stare at them typing for an eternity.”

Of course, there were also some detractors defending the classic “hello.” “I say hey and then in the same message ask my question,” explained one. “It feels rude to just jump into the question ya know?” Another agreed that launching straight in with a work question could easily be interpreted as rude: “You gotta talk nice to me before I finish my coffee.”

Clearly, there’s a major culture-clash brewing under the surface of Microsoft Teams messaging etiquette. This TikTok grabbed people’s attention because it reflects a widespread pet peeve—but that pet peeve only exists because a lot of other people think it’s fine to send a standalone “hello” message. And unless you’re bold enough to create a status message telling everyone that you’re anti-hello, this petty workplace conflict is just going to keep happening.

The Daily Dot has reached out to @engineerlexi via email.

Update Aug. 31, 2:03pm CT: In a statement, @engineerlexi tells the Daily Dot that, “Everyone has their own preference when it comes to communicating in the workplace. Nowadays with remote work being more common, I think many people like to be straightforward and get right to the point when messaging colleagues. It’s easy to be both polite and efficient in one message. I’ve found including my question in my initial message gets me the quickest response. I thought this TikTok would put a smile on some people’s faces that might deal with this from time to time.”