But with his newest tale, Conquered by Clippy, Delaney has found his voice—and his audience. The searing, 16-page opus (“for super-mature audiences only”) arrives like a bolt from the blue, ready to radically transform any reader with half an appetite for adventure. 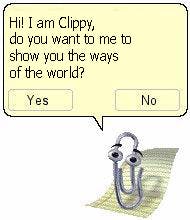 In the tradition of John Gardner’s Grendel or J.M. Coetzee’s Foe, it appropriates an archetypal character for a twisted narrative that challenges all we think we know about him.

Sure, you’ve interfaced with Clippy, the cartoon paper clip in Microsoft Office. But have you seen him fuck? 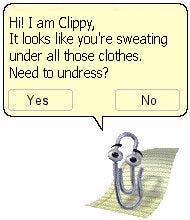 “When I was a young boy, I was lonely and lost, but my mother brought me a computer with Microsoft Word,” Delaney told me in an email. “Clippy appeared to me—with kind eyes and a steel shoulder to cry on, he listened to my prayers. He was a powerful and sensual presence in my life.”

That sensuality is in abundance when Clippy and Christie Aackerlund, the heroine of the Digital Desires series, finally get down to business:

She reached out and grabbed his glowing red end. It was hot, but not too hot. He uncurled further at her touch.

She smiled with one side of her mouth, then got on her knees. Unlike an actual paperclip, the end of his coiled body was rounded, and it felt smooth in her mouth. As she lapped and sucked and tongued at it, it became even redder and hotter. Her own human body part (vagina) felt hot too.

Sure, you’ve interfaced with Clippy, the cartoon paper clip in Microsoft Office—but have you seen him fuck?

It’s easy to see why the Internet is abuzz about Conquered by Clippy: It combines the illicit thrills of Fifty Shades of Grey with the allure of crummy software and canny exposition. Where else can one read pitch-perfect dialogue like “I think my Windows Phone 8.1 smartphone is broken,” or beautifully observed details like “a thud that made Christie’s bosom jiggle”?

Even so, the modest Delaney sees himself working in a rich tradition alongside celebrated authors like Chuck Tingle (Space Raptor Butt Invasion), Christie Sims (Forced by the Ogre King), and Carlton Mellick III (The Haunted Vagina). They “paved the path for me,” Delaney said, “and I hope I pave the path for many others.” 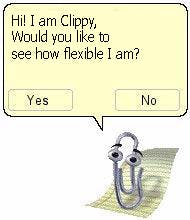 At the core of Clippy is a compelling kink that encompasses a basic human need.

And, like his literary forebears, Delaney is deeper than the titillating mechanics of sex with a “living inanimate object.” At the core of Clippy is a compelling theme that encompasses our basic human need to be needed, along with the promise of automated bliss. Christie, an independent woman, keeps rejecting Clippy’s “assistance”—only to find she craves it more. In the end, she’s burst both ovaries with twin orgasms and “spurted lady-butter” everywhere.

As Delaney put it in his email:

Is it not the case that all technology is simply the fulfilled fantasy of being taken by machines? If we didn’t dream of being helped and improved by objects of our own making, we’d still be living in caves, with dick drawings scrawled on the walls as our only erotic entertainment. … Technology marches on, making a mockery of outdated tools like paperclips. But let me leave you with this little piece of existential dread: What is the significance of a human in a world infused with intelligent objects? Technology, like the Internet of Things, will wake up the inanimate landscape around us. Will it need us? Or will it mock us as unhelpful coils of meat?

A hot new writer with fearless ideas—Delaney “writes from the heart instead of wasting time with research or experience,” per his bio—will always, by nature, court scandal. Already, in correspondence with the Daily Dot, he has aggressively sought to stir controversy.

“Fuck binder clips,” he wrote in response to a question about non–paper clip-document-fastening devices. “Fuck their pinchy plastic and swingy wannabe steel loops. You try to be nice to them, try to treat them right, but they clamp down on your most sensitive of flesh-bits like ungrateful dogs. Binder clips can go to heck.” This sort of remark will surely fuel speculation that Clippy is the cynical work of a man bent on pushing his own office-supply agenda. 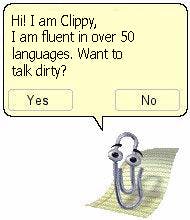 Whatever his aims, his artistry may eclipse them. I defy you not to be chilled by the corporate conspiracy that unfolds in Conquered by Clippy—a plot worthy of the late Michael Crichton. I weep for the austere beauty of descriptions like “He got his end to vibrate like an Xbox controller as he twiddled the rim of her anus” and “They flew over the United States, with all its trees and buildings and rocks.” Mostly, however, I am lost in thoughts of a universe I never would have experienced were it not for Delaney’s vision, a place of untold purity and potential. 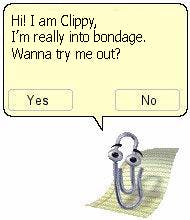 “In a way, we are all Clippy,” Delaney told me. How I wish I could believe that. But such is the heartbreak of this story—it tantalizes with strange succor that ever remains just out of reach.

Photo via Lilly Darma/Flickr (CC BY 2.0) | Remix by Jason Reed