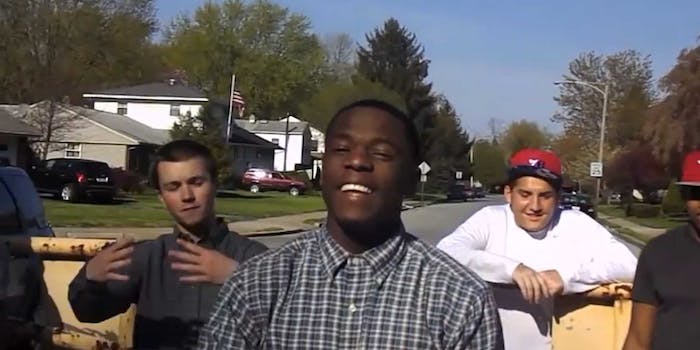 Jay Harris apparently had more interest in rapping than being a wide receiver.

One of Pennsylvania’s top football recruits was stripped of his scholarship to Michigan State after he posted an explicit rap video on YouTube.

Jay Harris, a Downingtown East wide receiver, originally signed a letter of intent with Michigan State in February, but he noted that his commitment was “halfhearted.”

“I’ve been thinking about doing this for a couple years now,” Harris, who has been interested in a music career since his freshman year at Downingtown East, said.

Going by the name Jay DatBull on YouTube, Harris released his first single, titled “Datbull 4 Life,” on YouTube and has an album release slated for June 1. The track is is a profanity-filled banger filled with references to drugs, women, and sex that finds him in the driver seat of a car and in front of his friends around suburban Pennsylvania. At one point in the homemade music video, it appears that Harris is smoking marijuana.

The video’s received over 92,000 views since its release. This summer, Harris is supposed to collaborate with producer M. Stacks, who has also worked with Wiz Khalifa and Mac Miller.

The Philadelphia Inquirer originally reported that Harris turned down the football scholarship, but an update to the story stated that the college stripped him of the scholarship over the rap videos.

A Michigan State spokesperson told the Inquirer that it was “a mutual decision.”