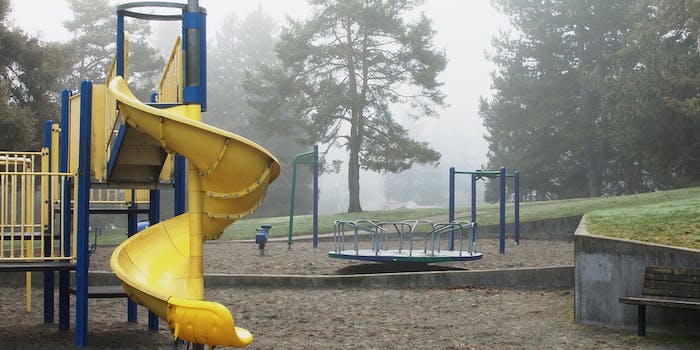 This playground pooper is public enemy No. 2 in Ypsilanti

The city is desperate to flush out a serial soiler.

Over in India, there’s an effort underway to curtail the common practice of defecating in the open. But in Ypsilanti, Mich., there seems to be just one serial public pooper, and his days are numbered, too.

With a series of giant billboards and a Twitter hashtag campaign, locals hope to expand a stalled manhunt and bring the dastardly dumper to justice.

Where I live someone is pooping in the parks. So they made this to catch him (I’m betting it’s a guy) #ypsipooper pic.twitter.com/Q508MVwa6w

The sign, owned Adams Outdoor Advertising, looms over Interstate 94. Its rotating series of messages—including “Help us flush the pooper”—plainly refers to whoever has been soiling the slides at a playground in nearby Prospect Park for the past six months. MLive reported that police have even installed a hidden camera to capture him or her in the act.

We placed a call to Todd McWilliams, general manager for Adams Outdoor Advertising’s Ann Arbor branch, to find out who had rented the billboard. He told us that the idea was an internal one: after an employee from the Ypsilanti area had mentioned the pooper, the company decided to insert the cheeky messages between regular advertisements on the sign the same way they occasionally display a public service announcement or AMBER alert. “Our art guy had a lot of fun,” he said. “He came up with a few of designs—and I rejected a few.”

“I’m told that the Ypsilanti police actually now have a person of interest,” McWilliams then revealed. “We brought more attention to the problem, and we’re just glad if we can get this person to stop doing what they were doing.”

Still, anyone with further information on this case is encouraged to contact Detective Sergeant Tom Eberts at 734-482-9878 or Crime Stoppers at 1-800-SPEAKUP (773-2587). In the meantime, give yourself a pat on the back for sitting on the toilet every time you feel a rumbling in your bowels—you’re the real hero in this whole sorry mess.

Update: Reader Andrew Thomas points out that the mystery pooper, or someone pretending to be him, has a Twitter account of his own.