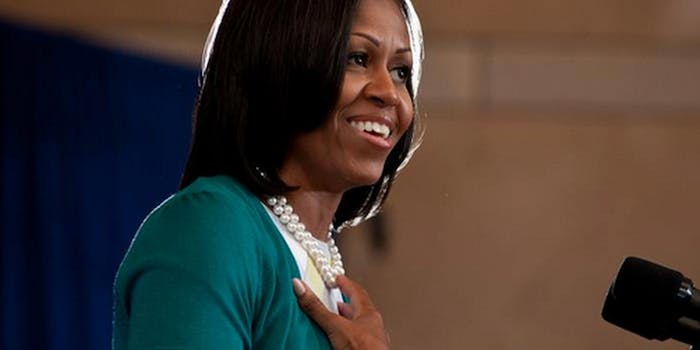 The First Lady has accrued more than 5,000 followers since sending out her first tweet early Thursday morning.

All rise, ladies and gentlemen. The First Lady of the United States is now on Twitter.

Michelle Obama announced her presence on the microblogging site this morning, debuting her verified Twitter handle @FLOTUS shortly after 11:30am EST. The handle operates on what appears to be a slick profile page, one stacked with a profile shot of Obama and family dog Bo and a cover photo that features the First Lady hugging an old gray-haired lady while Vice President Joe Biden’s wife Jill and another old lady look on and smile affectionately.

The First Lady has accrued more than 5,000 followers since sending out her first tweet. She’s only following 15 accounts as of press time, and most of them are booooooring: the National Guard, Department of Agriculture, Office of VP Biden, and Let’s Move accounts are the most entertaining of the bunch.

The giant pink elephant in the room is that she’s not currently following her husband, President Barack Obama, leader of the free world, who tweets somewhat regularly on the @BarackObama account.

The First Lady’s first tweet also served as a not-so-subtle suggestion to followers to retweet the message and wish her a happy birthday. Today, the first lady turns 49.

This is not the first time that First Lady Obama has taken to the Internet to increase her presence with fans and followers. She joined Pinterest in June and has long maintained a Facebook fan page, though that one’s almost surely run by a staffer.

Twitter should be a bit more fun for the First Lady. We can only hope it’s just a matter of weeks until she decides to dive into Weird Twitter.