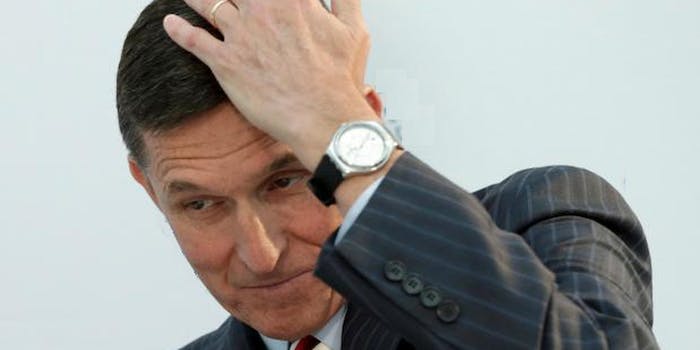 The ad, created by Nike, became an outrageous meme this week after Nike announced that Kaepernick would be one of several sports stars featured in its 30th anniversary “Just Do It” ad campaign.

Outraged conservatives, still thorny about the football player’s protest against racial inequality by kneeling during the national anthem, first ran a #BoycottNike campaign and then began reworking the simple ad concept. It wasn’t long before the left were at it too.

“Believe in something. Even if it means sacrificing everything,” the tagline, useful for all kinds of ironic deployment, reads.

Enter Flynn Jr. who is set on riding this trend out to rally some sympathy and support for his father.

On Wednesday morning, he posted this sincerely crafted piece:

The internet, however, in its own dark way, celebrated it for its irony.

Flynn, the first Trump campaign associate charged by special counsel Robert Mueller as part of the ongoing investigation into Russian interference in the 2016 presidential election, pleaded guilty in December to lying to the FBI about his contact with Russian officials.

Almost immediately, as expected, there was a Russian iteration of Flynn Jr.’s meme.

Meanwhile, the rest of the thread of tweets beneath the meme is a growing pile-on of vitriol as users jump at the chance to blast Flynn  Jr. and his dad a “traitor.”

lol yeah he believed in something called unregistered foreign agent money. Sacrificed everything for it.

Good meme, jr, try another one but with Benedict Arnold this time

“Lie to the FBI. Even if it means going to jail. Just do it.” – Mike Flynn