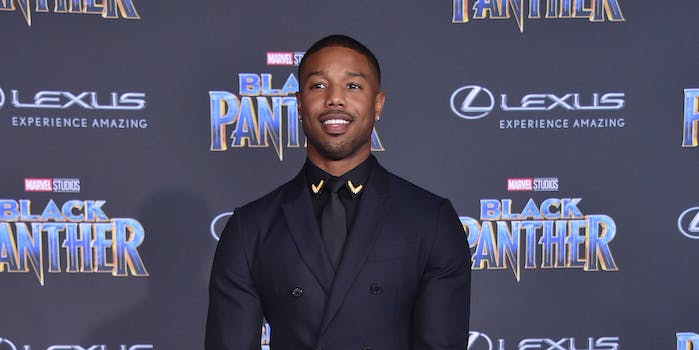 Michael B. Jordan accused of cultural appropriation for his new rum brand (updated)

Jordan has apologized and said he will rename the brand.

Michael B. Jordan became the latest celebrity to premiere his own brand of liquor, but it was immediately met with pushback and accusations of cultural appropriation over its name.

Over the weekend, Jordan celebrated the launch of J’Ouvert Rum by appearing in a series of Instagram Stories posted by model Lori Harvey (Jordan’s girlfriend).

A photo of a boxed set tied around the rum’s launch included a couple of cigars, a small knife, and many of the ingredients you’d use to make a cocktail such as a shaker, a pourer, a mixing spoon, and several pieces of fruit also appeared online. The top of the box included a pronunciation guide for J’Ouvert (jōō’vā) and details on the origins of the name, which doubles as the name of a festival that takes place in Trinidad and Tobago (where the rum is distilled):

Derived from the Antillean Creole French term meaning “daybreak,” J’OUVERT originated in the pre-dawn streets of Trinidad, as celebrations of emancipation combined with Carnival season to serve as the festival’s informal commencement. Crafted on those same islands, J’OUVERT Rum is a tribute to the “party start.”

It didn’t take long for the rum to raise eyebrows. @carribbean_cece pointed out J’Ouvert Rum’s logo on the swag box, which depicted three islands; Trinidad and Tobago is a two-island nation.

One commenter pointed out that Las Lap co-founder Scott Robert Williams, who is originally from Trinidad, also co-owned J’Ouvert Rum. But others quickly pointed out that Williams has a track record of repurposing names surrounding Carnival—a celebration that takes place over two days before Ash Wednesday in Trinidad and Tobago (and is celebrated throughout the Caribbean)—at his restaurants.

More objections arose when people discovered that the name J’Ouvert was trademarked. You can find the listing for J’Ouvert on the United States Patent and Trademark Office’s website, which is categorized under Goods and Services as “Alcoholic beverages, except beer; Distilled spirits; Rum-based beverages; Rum.” Jordan’s name isn’t attached to the trademark; it’s owned by Louis Ryan Shaffer.

But the trademark listing also includes the phrase “The wording ‘J’OUVERT” has no meaning in a foreign language.”

It’s that specific language on the trademark that really struck a chord with people. The cold and legal phrasing of the trade erases J’Ouvert’s origins and history in Trinidad as well as its role in a specific culture. And while Jordan’s name isn’t attached to the trademark, he still faced much of the backlash since it’s his brand of rum.

Justin Koo, a copyright academic and law professor, pointed out that J’Ouvert’s trademark was, for now, limited to the U.S. and in reference specifically to alcohol after some believed that the trademark also applied to J’Ouvert’s ties to Carnival.

“Just for clarity, as I’m seeing wild interpretations of what this ‘JOUVERT ‘ trade mark application means,” he tweeted. “It is limited to the sale of rum or confusingly similar products. If granted, the mark does not allow the owner to stop people from using the word ‘JOUVERT’ descriptively.”

A Change.org calling to stop the trademark for J’Ouvert has more than 2,600 signatures as of press time.

It’s not the first time that a celebrity’s liquor brand has been knocked for cultural appropriation. Earlier this year, Kendall Jenner debuted a new tequila that was criticized for its name as well as ripping off its logo from a different tequila brand.

Update 2:24pm CT, June 23: Paula Gopee-Scoon, Trinidad and Tobago’s minister of trade and ministry, said that the name and trademark of J’Ouvert Rum were “of extreme concern.”

In the days since the backlash against J’Ouvert began, Nicki Minaj (who is Trinidadian) joined those highlighting the history of J’Ouvert in calling out the issues with trademarking it. She noted on Instagram that while Jordan probably didn’t think he was doing something offensive”now that you are aware, change the name & continue to flourish & prosper.”

And now Jordan has apologized for cultural appropriation and has vowed to rename his rum brand.

“I just wanna say on behalf of myself & my partners, our intention was never to offend or hurt a culture (we love & respect) & hoped to celebrate & shine a positive light on,” Jordan wrote on Instagram Stories. “Last few days has been a lot of listening. A lot of learning & engaging in countless community conversations … We hear you. I hear you & want to be clear that we are in the process of renaming. We sincerely apologize & look forward to introducing a brand we can all be proud of.”