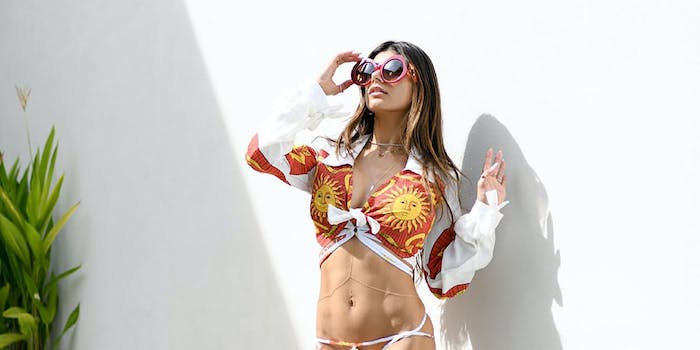 'It's men objectifying children and women [that are] the problem.'

Mia Khalifa apologized after a TikToker touched on the troubles she faced as a child because people thought she looked like the ex-porn star. But viewers are placing the blame squarely on men and society.

TikToker @oreo_mlkshake’s video explaining that, at 13 years old, she had to stop wearing her glasses because high school boys made her “uncomfortable” with their comparisons to Khalifa racked up over 5 million views since being posted at the end of June.

Khalifa’s glasses were her trademark look during her brief stint in pornography, to the extent that they actually sold for over $100,000 in a charity fundraiser in 2020. Her Instagram bio currently reads: “Are you even a brown girl with glasses if you haven’t been called Mia Khalifa?”

But despite coming across as somewhat glib with that joke, the idea of a young teen being objectified by older guys who think they see a resemblance to Khalifa doesn’t sit well with the her.

She shared @oreo_mlkshake’s video to her own page in a duet that saw Khalifa crying over the content.

“I’m so sorry,” she captioned the duet. “I don’t wear them anymore for this reason.”

Viewers expressed their sympathy for both women, reminding Khalifa that the actions of others are not her fault.

“It’s men objectifying children and women [that are] the problem,” wrote @notmedicated. “I hurt for the both of you.”

“This breaks my heart for you and the girls that have to hear this. But I promise it’s not your fault, it’s just ppl,” another user agreed.

Khalifa also commented with an apology on @oreo_mlkshake’s original video, to which the TikToker responded in the same manner as everyone else: “No you don’t understand. This wasn’t ever your fault. You’re an inspiring woman.”

Prior to Khalifa catching wind of her video, @oreo_mlkshake posted a follow-up hitting back at commenters who derided her for being traumatized by the comparison.

“The funny thing is, any time I bring up the fact that I started being compared to Mia Khalifa at 13 years old, and how it made me uncomfortable and it made me feel sexualized, it’s always men and boys that try to convince me and try to tell me that I’m being too dramatic, that it was just a joke,” she said. “Every time that I try to explain to them that sexualizing a young person is not okay and it’s damaging to that person and to the person that is being allowed to do it, how it feeds into pedophilia in our society, they don’t care.”