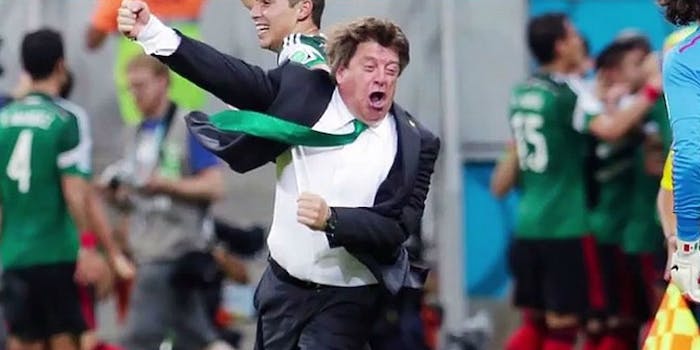 We'll miss you and your fantastic touchline antics, Miguel Herrera.

Despite leading Mexico to a Gold Cup title last weekend and despite the fact that El Tri is heading into a one-game playoff showdown with the U.S. for the right to play in the Confederations Cup, the Mexican national soccer federation fired head coach Miguel Herrera on Wednesday, two days after allegedly punching a journalist in the neck.

The apparent confrontation came in the security line at the Philadelphia airport a day after Mexico’s 3-1 win vs. Jamaica in the Gold Cup finals. Herrera apparently attacked TV Azteca’s Christian Martinoli, who had been critical of Herrera during the Gold Cup, allegedly punching Martinoli in the neck. Then, Herrera supposedly challenged Martinoli to a fight.

Herrera has been relatively successful as Mexico’s head coach, but that’s not why we’ll remember him. No, we’ll think back fondly on Herrera, because of how GIF-able he was. In fact, the Guardian referred to him as “the combustible Mexico coach famed for his exuberant touchline displays and sharp disagreements with referees.”

He was fun to watch on the sidelines, and luckily, we’ll always have those celebratory memories. Here are eight of his greatest GIF hits.

4) Herrera celebrates a 1-0 lead against the Netherlands

5) Herrera celebrates a 1-0 lead against Croatia

7) Herrera loses his shit in that same penalty shootout

8) And of course … the Dragonball Z-inspired granddaddy of them all.

(To see how that final GIF was produced, check out this behind-the-scenes video on YouTube.)

But here’s the good news for Herrera. At least he’s not alone in his misery of being taken off the football field against his will.