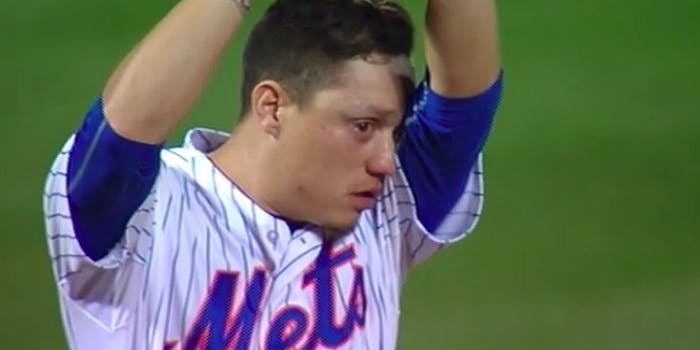 With the Major League Baseball trade deadline fast approaching, it wasn’t necessarily surprising that New York Mets shortstop Wilmer Flores reportedly was dealt to the Milwaukee Brewers for Carlos Gomez. What was strange, though, was that even after a report emerged that Flores had been traded, he continued to play. For the Mets. And he was in tears about all of it.

Though the Mets denied the trade postgame, there were a number of problems with this scenario—none of which involved Tom Hanks or A League of Their Own.

For example, what happens if Flores gets injured after the trade was completed? We know that Flores came to bat against San Diego Padres pitcher Kevin Quackenbush in the bottom of the seventh and grounded out. But what if Quackenbush had hit Flores in the ribs with the ball, or what if Flores had torn his hamstring running to first base?

Wilmer Flores has been traded from the Mets and he is actually batting right now for the Mets. This is the Metsiest thing that ever Mets'd.

Just what in the hell is going on here?

Asked official involved with Gomez trade why Flores is still in game. Reply: “No deal is done. The entire world has jumped the gun.”

For those asking why Flores is still in: terms are agreed to, but deal is not done until Brewers sign off on Wheeler's physical.

And yes, whether the deal is done or not, it looks bad and they should realize that by now.

Which was why Flores was crying in the top of the eighth inning (as if he, I don’t know, had just been told about a trade). Unless…

The good news for Flores: For now at least, he’ll stay with the only major-league team he’s known. The bad news: That team is the Mets.