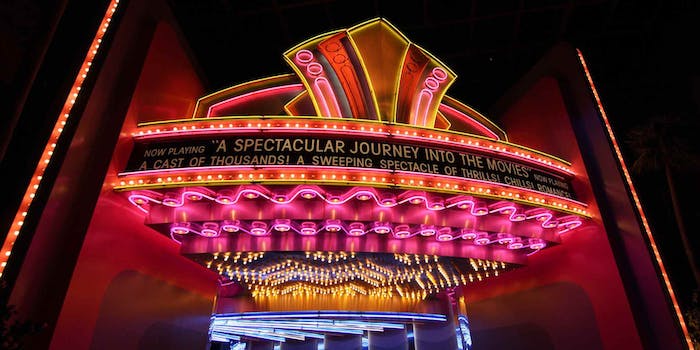 The TSA won't be coming to a theater near you.

Two recent attacks in movie theaters have had some theatergoers questioning the safety of a dark, packed, stadium of 200 people with no security checks. On Wednesday, a Nashville movie theater was the scene of an attack by a man wielding a hatchet, pepper spray, and a BB gun. Last month, a shooter in Lafayette, Louisiana killed two and injured nine others with a .40 caliber handgun.

Each of these events have occurred as the the trial of James Holmes slogs through its sentencing phase. Holmes, who very well may face the death penalty, killed 12 and injured 70 during a packed screening of The Dark Knight Rises in Aurora, Colorado back in 2012.

The apparent “trend” has some questioning whether theaters need security similar to that experienced at concerts or sporting events. Security expert Howard Levinson has worked with over 100 theaters since the Aurora shooting to install metal detectors and night vision cameras, while training staff to look for troubling behavior. According to a study by research firm C4, a third of moviegoers support measures like metal detectors and armed guards, and 14 percent even support an armed guard per movie theater, like Air Marshals on planes.

This is all absurdly reactionary—there is no data to support the idea that movie theaters have specifically become a target for mass shootings, let alone because of lax security. As a Mother Jones analysis of 62 mass killings found, the prevalence of security is rarely a consideration when shooters select locations to target. More importantly, however, is the lack of evidence in support of the security measures consumers seem to want.

There is no data to support the idea that movie theaters have specifically become a target for mass shootings, let alone because of lax security.

Bag checks and pat downs often make us feel safer, if a little violated, but they rarely do much to deter a determined attacker. A rash of school shootings in the 1990s and early aughts saw many schools increase security. According to a 2009 study by the National Association of School Psychologists, 68 percent of high school students report seeing armed guards or police officers in school buildings, 70 percent report the use of security cameras, and 11 percent of students report going through metal detectors before entering school.

The more security measures we adopt in places that are actually pretty safe, the more we cultivate the irrational paranoia that encourages consumers to demand that surveillance in the first place. Metal detectors in theaters, just as in schools and airports and sports stadiums, are merely there to comfort the minds of those entering the building and keep liability low for those who own it. A group of survivors of the Aurora shooting are suing the Cinemark theater where the incident took place for supposedly neglectful security standards.

The concept of “security theater”—when security measures seem more effective than they really are—achieved mainstream status after the implementation of increased security at airports after the terrorist attacks on September 11, in which 19 hijackers managed to get through TSA with box cutters. Airport security has gotten seemingly more stringent and invasive in the 14 years since those attacks, but study after study finds that razor blades and even firearms can still make it through undetected. Just this past June, the head of the TSA was “reassigned” after agents failed to find firearms and explosives in baggage a staggering 95 percent of the time.

Keep in mind, that’s after three successful hijackings that ended in the largest terrorist attack in history and numerous attempts since. That’s also after $8 trillion in federal spending to prevent precisely those incidents. If a decade’s worth of research, two presidential administrations, and a massive outcry by the public can’t even keep airplanes safe, will we be any more effective at making movie theaters safer?

Bag checks and pat downs often make us feel safer, if a little violated, but they rarely do much to deter a determined attacker.

The sad, seemingly unacceptable truth is tragedies like those experienced in Nashville, Lafayette, and Aurora may not have truly been preventable through the simple safety precautions measures that we often ask for in response to mass shootings. Security theater is a popular solution not because it works but because it feels like it works. It gives us—the moviegoers, sports fans, and passengers not bent on horrific violence—a sense of control over a society that seems to produce a great number of broken people with easy access to weaponry.

The drawbacks of expanded theater security are not simply the expense of implementing armed guards and metal detectors. While customers want more security, the C4 study also found that they didn’t want to have to pay for it—in the form of increased ticket or concession prices. Putting the burden on individual theaters also allow us to ignore more lasting solutions, such as sweeping gun control reform and increased resources for the mentally ill.

Mass shootings are a real and unique problem to American culture. A study published earlier this week by the Congressional Research Council found that deaths in mass killings have increased from an average of six a year in the 1970s to an average of 33 between 2010 and 2013. Ignoring this problem is not an option. But as President Barack Obama said in his vigil for the victims of the Sandy Hook Elementary School shooting in 2012, “Are we really prepared to say that we’re powerless in the face of such carnage?”

If the outcry after every public killing is any indication, the answer to that question is a resounding no. However, if all we’re willing to do is install metal detectors and hire a few guards, instead of tackling the difficult and complex causes of this phenomenon, it certainly feels like we are.