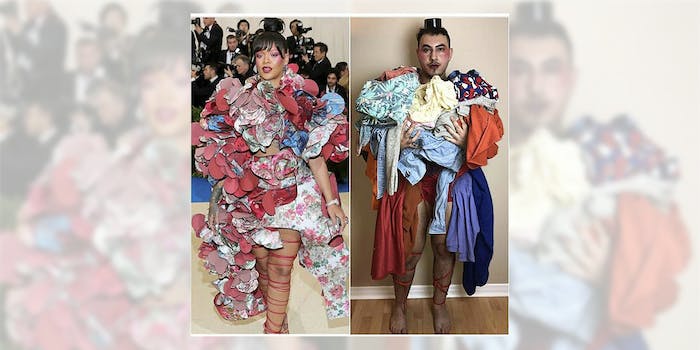 The absolute best tweets from the 2017 Met Gala

Whenever celebrities try to hard, memes are there to put them back in their place.

If you were on the internet last night and this morning, you’d think a lot of things won the Met Gala: Bella Hadid’s butt, Kendall Jenner’s butt, Cara Delevingne’s hair, Rihanna’s dress.

But let’s be honest here. This is the internet, and only one thing truly wins at the end of a day of celebrities being ridiculous: the memes.

Oh, how there were memes.

(For those of you that don’t know, the Met Gala is a thing where celebrities dress really opulently to impress Anna Wintour, with the winner taking home extra 50-50 raffle tickets.)

(But if you really are out of the loop, each Met Gala has a theme, and the hope is that attendees will dress as fashion-forward as possible. It skews toward ridiculous, which is what makes it such fertile ground for internet mocking.)

As you can see, while a broom sticking out of your back might look ridiculous, in the context of crazy Met Gala outfits, it is not that ridiculous, which is what makes this meme ridiculous but also relatable.

Here is someone spoofing Rihanna’s dress.

Another meme from the event is this meme.

One Twitter user speculated why all these rich people spent their time in the Met’s decidedly unsexy bathrooms.

Here’s a meme about Kendall Jenner’s dress that I don’t even understand and my job is to get memes.

(Another meme person explained to me that the joke is that she has no butt. I guess that’s an OK meme.)

Some people compared members of the rap group Migos to the Three Blind Mice.

This meme says everyone would look like they’re part of a video game if they just had swords. We agree.

This isn’t exactly a meme, but here is one celebrity excited to see another celebrity. Celebrities!

Taylor Swift, who last year met Tom Hiddleston at the Met Gala and then broke up with Calvin Harris so she could start dating Tom Hiddleston, did not attend this year. Some people made jokes about that.

Taylor swift serving at the #MetGala 😍😍😍 Kween of 🐍🐍🐍 pic.twitter.com/BzxBzSBKvV

Lots of people making memes even meme’d themselves, because for as odd as some of these celebrity outfits are, they are still more impressive than anything the average person could pull off.

Sometimes, at the Met Gala, art even imitates memes.

When a joke turns into reality… #MetGala pic.twitter.com/GNoppkehtQ

This too is a joke about how ridiculous Met Gala outfits are.

This #MetGala outfit was stunning pic.twitter.com/hS17NqCQLZ

Lol that dog didn’t even go!