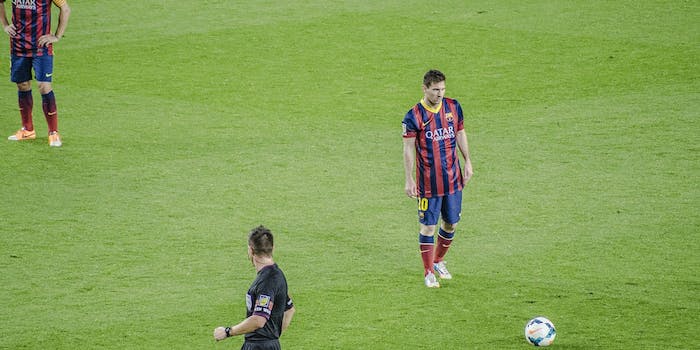 For Messi and Neymar, spectacular goals are just another day at the office

Messi and Neymar team up for another unfair, all-universe goal.

Having Lionel Messi and Neymar on the same team is an embarrassment of riches.

Often the result of having two megastars on the same squad is their combined greatness is far less than their individual talents. Ask Shaq and Kobe, LeBron and D-Wade, or even A-Rod and Jeter. In the case of the superstar duo of Messi and Neymar, who hail from neighboring countries Argentina and Brazil respectively, the pair’s skills complement one another as witnessed in a truly awe-inspiring goal during FC Barcelona’s match against Villarreal.

The play starts with Uruguay star Luis Suarez making a cross-field pass to Messi who fades left before launching a powerful, curving pass to the left of the opponent’s goal. Seemingly out of nowhere, Neymar catches the ball mid-flight, and in one movement taps it behind the goalkeeper.