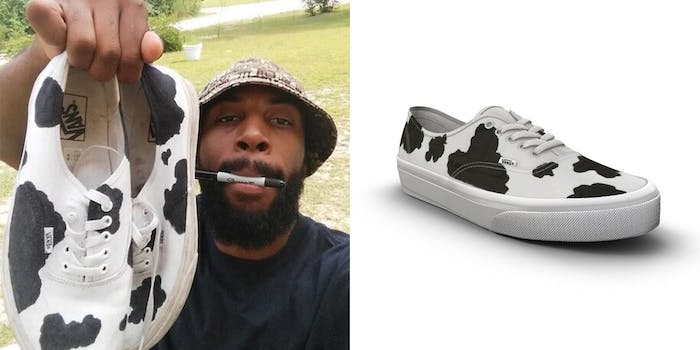 The story went viral this week thanks to TikTok.

Days after a designer used TikTok to accuse Converse of stealing the design she submitted as part of an internship application, another designer is coming forward to say that a different shoe company stole his design.

Ment Nelson, an artist based in South Carolina, first shared a TikTok video made by a friend earlier this week that detailed his story and told Vans to “stop stealing from Black creatives.”

A few years ago, Nelson took a sharpie to his white pair of Vans and drew several spots on it so that they would look like a cow, tweeting “Moooo-d.”

He posted different photos of his custom-designed shoes in February 2018, which got him a direct response from Vans’ official Twitter account and to another Twitter user after he tagged the brand.

The viral TikTok video also highlighted the Vans’ website, which included the phrase “A whole Moo-d” and photos of the cow print shoes. (It also appeared as the caption of a Facebook post for Vans Canada in January.)

“Vans stole my concept,” Nelson wrote.”They couldn’t stand the fact a Black man marketed this design so well. Plus my version looked better than the ones they released.”

The Daily Dot has reached out to Vans and Nelson.

While Vans pointed to its 2018 print for, it later corrected itself by highlighting that Vans had featured cow print shoes as far back as 1991.

“Hey there Ment,” Vans wrote. “We just had to fact check ourselves on this one and we apologize we made a mistake in our last response. We dipped way back into the archives, our new customs and the 2018 shoe were inspired by this 1991 cow print.”

Nelson replied by pointing Vans’ hypocrisy in the article from Under the Palms (a website run by Vans shoe enthusiasts but isn’t officially affiliated with Vans) that described cow print as “sort of fresh and new.”

So far, Vans has yet to publicly respond to the latest accusations of design theft. But with a viral TikTok video relaying what Nelson said happened, on top of Monge’s own viral TikTok, Nelson’s story is already spreading further than it did just a few months ago.