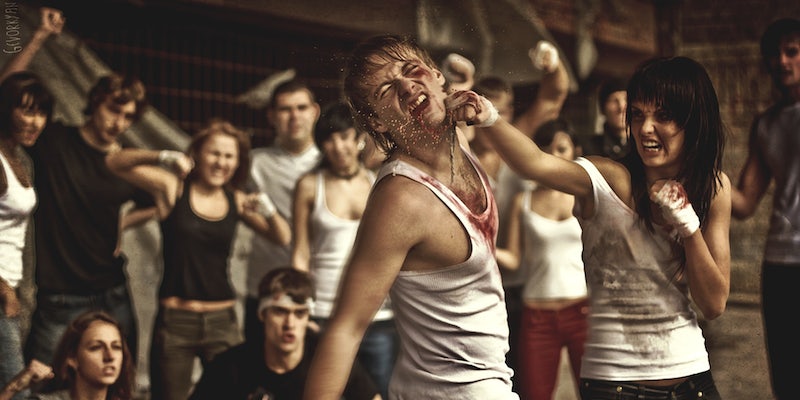 #MensRightsMovies are coming soon to a friendzone near you

Late Monday night, Aaminah Khan was deep in the middle of a Twitter rant against white privilege.

A self-described “muslim bipolar bisexual beautiful intersectionalist geek femme genius,” Khan had sarcastically proposed “bigoted cracker history month” earlier in the evening.  But the turning point of Khan’s day came when she tossed off an annoyed tweet about a particular subset of world-ruining white people—bronies—then followed it up with a few more:

how to land in the friendzone in ten days #mensrightsmovies

Khan had just landed in the trend zone. Over the next 10 hours, #mensrightsmovies spread across Twitter, garnering thousands of tweets and even more commentary from onlookers about the system of “men’s rights” beliefs being skewered in the tag.

If you’ve spent any time on the Internet you’ve likely encountered self-described men’s rights activists (MRAs), a subset of men who believe that feminism is the great tragedy of American politics. Many MRAs, including a group on Reddit, refer to the act of becoming an MRA as a waking-up process—similar to taking “the red pill” in the futuristic dystopian film The Matrix.

The stereotypical MRA wears fedoras, a throwback to “a more genteel, simpler time.” His language tends to be strongly anti-feminist, sometimes manifested in death and rape threats against feminists or feminist supporters on the Internet. Other clichés typically attributed to MRAs include displays of white privilege, denial that rape culture exists, complaints about being “friendzoned” by women, and usage of the term “misandry.”

In other words, #mensrightsmovies is comedy and commentary gold:

The Importance of Seeming Earnest #mensrightsmovies

The Last House On the Right Aren’t Rapists, But I Don’t Hear About Them! #mensrightsmovies

They Don’t Deserve a League of Their Own #mensrightsmovies

#mensrightsmovies is my favorite thing to ever happen on twitter

#mensrightsmovies is the best thing that’s trended in ages

But while their general air of bitterness and entitlement make MRAs an easy target, plenty of participants in the trend pointed out that #mensrightsmovies already dominate Hollywood:

The #mensrightsmovies may not make any waves in mainstream media, but it’s serving as a fun and trenchant call-out and critique of current social inequalities—although the growing number of MRAs joining the movement may undermine the efficacy of spontaneous social media campaigns like this one.

So don’t fret if you can’t hop on Twitter and popcorn your way through this particular trend. Given the state of gender relations on the Internet, there’ll be plenty more where this one came from.