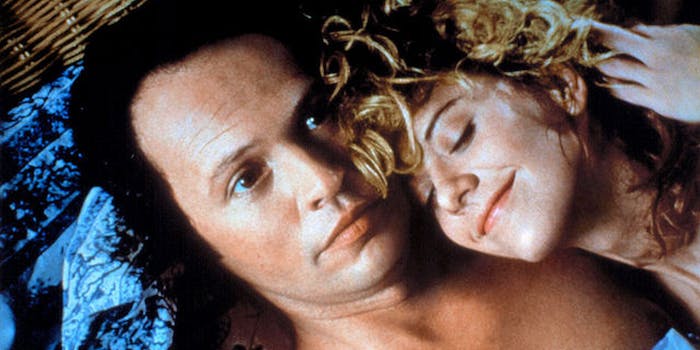 Ladies, here's why you should be worried when your male friends "poke" you on Facebook.

Can men and women be “just friends?” Only on Facebook.

Or at least that’s what Independent filmmakers Jesse Budd and Patrick Romero seem to think. To prove it, they went to Utah State’s campus library to interview male and female students.

The results of their findings led to 12,000 YouTube hits and a lengthy discussion on Reddit’s front page about what it means to wind up in the Friend Zone.

“Yes,” answered all the women to whom Budd and Romero posed the question.

However, with responses ranging from shrugging to a flat out “No,” men disagreed.

“Because of physical attraction, it’s not possible,” one male student answered. Another admitted to wanting to hook up with his female friend, sitting right next to him during the interview.

As the filmmakers pressured female students with more questions – ”Do you honestly think your male friends aren’t interested in you at all?” – some women began to waver. At the 2:35 mark, a speechless woman left the interview.

“Yes! That’s what I’m talking about!” the overjoyed interviewer exclaimed.

The filmmakers’ enthusiasm toward finding evidence to support their own viewpoint left some redditors wanting a more unbiased take. Some wondered about the lack of inclusion of gay, lesbian, or bisexual interviewees. Many thought that the answers would have differed significantly with a female interviewer.

“My wife, a psychologist, did a similar race based study for her thesis. It was statistically significant that the race of the interviewer changed the answers from a large group of people belonging to the same race (half interviewed by same race/half by other race),” commented redditor juliusseizure.

However, the majority opinion was in sympathy for the video’s friend-zoned males. Reddit commenters, who are predominately male, said they had a lot of experience.

“I cringed and felt sad when the girls started saying their guy-friend’s names. It was like hearing a list of 9/11 firefighters,” commented HansCool.

Over in /r/TwoXChromosomes, Reddit’s female ghetto (and I say that as a resident), women commented on the interviewees’ problematic approaches to friendship.

“What is sad is that all the guys interviewed implied that they wouldn’t be friends with a woman that they are not sexually attracted to,” commented LadyCupLover. “Is like if you selected your male friends based on sexual/romantic attractions and then ‘realised’ you cannot just be friends.”