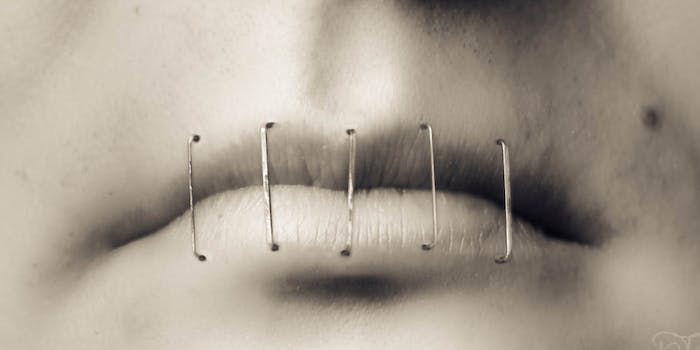 Why men don’t get a say in feminism

We need to invite men into our movement without handing over the reigns.

A few months ago, I watched in horror as a friend of mine engaged in a debate with a feminist blogger about the role of men in feminism.

“That’s not what I believe feminism is about,” my friend tweeted, when he was asked to stop trying to assert what women need.

A sound screeched through my head like brakes on a train, headed for disaster. My friend is a man, and the feminist blogger is a woman.

I DM’d my friend, trying to stop him from walking into a disaster of his own making.

“Hey, I know you mean well, but you don’t have any place telling a woman what feminism is supposed to look like.”

He didn’t DM back. Instead, my phone rang.

“Wait, do you really believe that? That men don’t get a say in feminism?”

Yeah, I believe that. And I’m going to tell you why.

As an editor and a writer, I believe that the subject of the story should be the one telling the story. It’s pretty simple.

Pause for a moment and consider that. When we were finally considered true citizens of this nation, it was because the men––the bosses, the owners––decided that we could. Yes, our foremothers fought and suffered for that change, but that history, that ownership, is one reason why women need to be leading the fight for women’s equality.

There is no debate over whether women are better off in the United States today than they were a few generations ago, but we have a long way to go. When it comes to Fortune 500 companies, we only make up five percent of the CEOs. That means there are only 25 of us out of 500. And only 18 percent of congress members are women.

These numbers are amazing compared to 1920, but horrifying and embarrassing considering that it’s been nearly 100 years since we were allowed the vote. We also face so many other challenges that it’s nearly impossible to list them all.

With mountains this huge to climb, we need men on our side. We need men supporting us, offering us their skills and resources, and speaking up for our issues. We need them at least partly because they are still in power. They are still our bosses. They are still signing our paychecks and writing our laws.

But where does the role of men in our movement end?

This question is something we think about nearly every day at The Good Men Project, where I serve as the Executive Editor. After a few years of tumult in deciding the focus and ethical grounding of our magazine, it became clear to us that being allied in the fight for equality for women was a crucial part of the discussion of what it means to be a good man in the 21st Century.

When people ask if The Good Men Project is a feminist publication, I try to make clear that we are “pro-feminist.” The GMP cannot, by its nature, be a feminist publication. We are a site for men, about men. Our focus is on fatherhood, male survivors of abuse and sexual violence, the changing role of men in the family and the workplace, gender expression, GBTQ issues, the role of men as husbands and partners and more. But we feel that the discussion about what is good for men cannot be had unless we are committed to being allies for equality for all people.

Trudy, author of Gradient Lair, where you’ll read some of the best feminist insights on the Internet today, wrote a post in 2013 that summed up one of the most important ways feminist-allied men need to challenge themselves:

One of my Black male feminist followers tweeted that he had to get over the notion of being women’s ‘heroes’ as a male feminist; that’s male privilege. And heroism, in this context, feeds into patriarchy anyway.

We don’t need to be ‘saved.’ We need everyone committed to justice—justice which truly benefits Black men as well. Patriarchy, patriarchal masculinity and phallocentrism destroys them; intersectional feminism isn’t the culprit.

Ariel Chesler, the son of noted second-wave feminist Phyllis Chesler, dug into his own questions about his role in feminism in a blog post on The Good Men Project.

While I believe that men, including myself, are and can be feminists, we must also walk a careful line. On Twitter, as with any public space, male voices are often heard the loudest. And, sadly, for some to hear important messages, the messenger must be a man. It is crucial to remember that sometimes the best way for men to support women and feminism is by listening or amplifying women’s voices.

Curious what his mother thought of this, I emailed her and asked. This part of her reply stood out most to me:

In it, I explained why so many feminists of my Second Wave generation remained wounded, psychologically slighted, by the universal preference for sons, not daughters, and by the terrible truths about women’s lives that we were only discovering. Thus, we ‘were trying to practice preferring women.’ Feminism quickly became a female-only ghetto: Turf.

I told Ariel: ‘Do not be surprised if some feminist women reject you simply because you are a man—or worse, follow you blindly for the same reason.’

There is a time and a place for women-only conversation—and then there is the public marketplace, the village well, the common conversation in which all voices may be heard. What to do with hateful voices, domineering voices, and with their destructive actions—ah, that is a question for the ages.

One guy who often gets allyship right is Jamie Kilstein. Kilstein is a comedian, a writer and the co-host of Citizen Radio. He said, “My role is to shut the fuck up, essentially. To listen, to be supportive when asked, and most importantly—and this is the hardest part, especially for dudes who get everything handed to them for the most part – is when women call you out and say, ‘what you’re doing isn’t helping’, even if it’s coming from what you think is a just position, not to then lash out at the women you’re trying to help. The first thing you need to do is listen, and not make it about you.”

Kilstein also noted that he tries to speak out about stories in the public eye that relate to the issues women face, but when it comes to truly personal movements, like the recent Twitter hashtag #YesAllWomen, his job isn’t to participate, but to help amplify the messages by retweeting women and going up against sexist men who may be trying to interfere.

I think the primary focus of men in our movement should be to speak to other men, and engage them in gaining equality for women, as well as working to support the efforts to change outdated ideals of masculinity, which include domination and violence.

Jamie Kilstein did a fantastic, and amazingly funny, job of this in his viral stand-up comedy set about rape culture. Kilstein managed to talk about women’s daily fear of being raped in a way that even the average dude could relate to. He opened minds by using his talents and platform to get a feminist message out to people who may have never even thought about rape culture.

She actually says a lot more than that, and I encourage everyone to read her blog post on the subject. But the essence of the message is this: Guys, be a part of what we’re doing, but be willing to let your voice be the supporting player, not the lead. Realize that it’s not that we don’t think you have value, it’s that we believe that in this conversation, we deserve to be in charge.

Photo by tobifirestone/Flickr (CC BY 2.0)