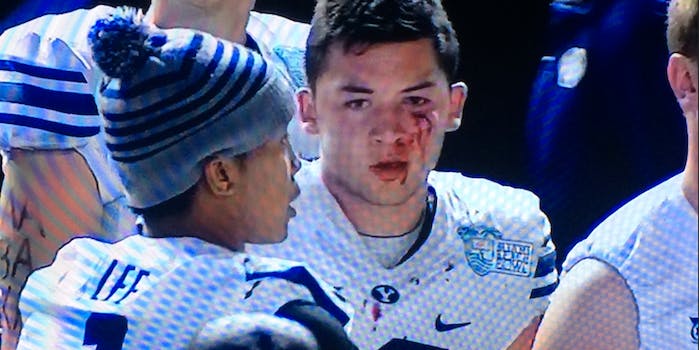 The Miami Beach Bowl was one of the most exciting college football games of the year, but most of the action happened afterward.

A contentious Miami Beach Bowl between Memphis and BYU ended in an a bloody brawl Monday following Memphis’s game-winning interception in double-overtime.

The fight started when a BYU player shoved Memphis defensive lineman Martin Ifedi for celebrating in front of the BYU sideline. Ifedi retaliated with a two-handed shove to the side of the BYU player’s helmet.

Within moments the two teams were piled up—fists and helmets were flying through the air.

Memphis linebacker Leonard Pegues can be seen stomping on a BYU player.

BYU sophomore defensive back Kai Nacua was in the middle of things and could be seen getting dropped by a right cross from Memphis defensive end Isadore Outing.

Bloodied, angry, and seeking payback, he was later shown sucker-punching tight end Alan Cross several times before being pulled away.

By the way, that’s the same Cross who was enthusiastically head butting his teammates before the game. Understandably, the punches didn’t seem to faze him.

The fight was an ugly ending to what was a fantastic game. Memphis bested BYU 55-48 in a back and forth affair highlighted by a 21-point fourth-quarter comeback, two fourth-down conversions on a game-tying drive, and a 55-yard field goal in overtime. The game may prove to be the most exciting of the bowl season, but could ultimately be remembered for everything that occurred after the final whistle.