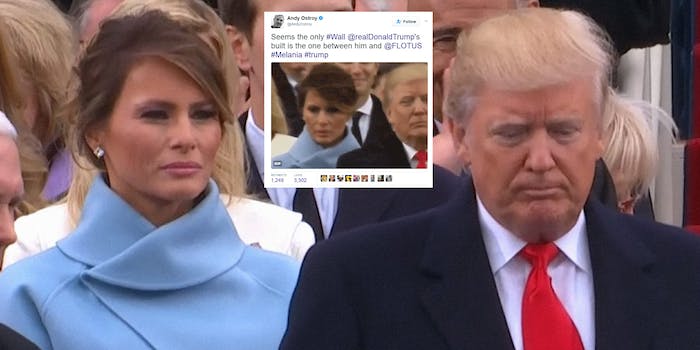 Melania Trump may (not) have offered proof of her testy relationship with the president.

Much has been speculated about Donald and Melania Trump’s marriage over the past few months, from her frosty demeanor at his inauguration to her posture during their first dance to her refusal to move into the White House. People assume she doesn’t like him, but there’s never been any real tangible proof of that. Even a massive Vanity Fair profile danced around the issue, ultimately concluding that… who knows.

Now, in what may have been an intentional action but also very well could have been totally incidental, we have proof. Kind of.

Andy Ostroy, a liberal blogger, was in disbelief over FLOTUS’s possible action.

I suspect this isn't a real account for @flotus… pic.twitter.com/ziWXhlHruV

That is a verified account for Melania, and prior to acquiring the @FLOTUS handle when her husband took office, she tweeted intermittent statements from it. Unlike her husband, she has not used it since Election Day.

The tweet was soon unliked, but archived here for all to see.

Mrs. Trump’s press office did not respond to an inquiry regarding the like.

Update 9:13am CT, May 2: According to the first lady’s director of communications, Melania Trump was not ‘aware’ of any of the behavior on her Twitter account.

“The First Lady wasn’t aware of any of this until I brought it to her attention,” Stephanie Grisham wrote in an email to the Daily Dot. Through her spokeswoman, Mrs. Trump declined further comment.