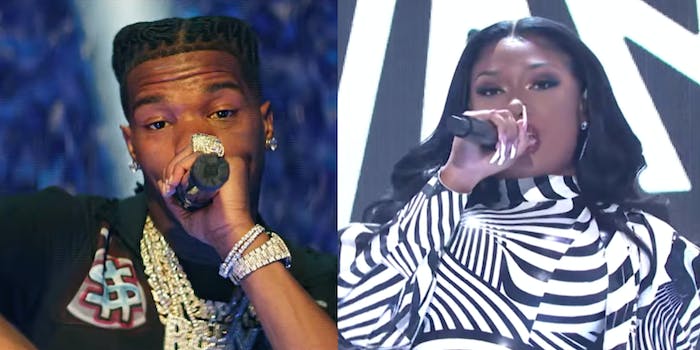 Fans of both rappers are sparring over who deserved the award.

Many are saying Baby was robbed of the award. The Atlanta rapper earned 13 platinum and 16 gold RIAA singles in 2020. His albums Harder Than Ever and My Turn went platinum, and Street Gossip and Too Hard went gold.

Twitter user @skiidem tweeted his perception of the disparities in the two rappers’ accomplishments.

However, some are arguing that many of those songs weren’t actually from 2020 and shouldn’t have been taken into consideration for the 2020 BET Awards.

Some are claiming Megan won the award out of sympathy. Megan was shot in the foot in July and named Tory Lanez as her shooter. Many initially failed to believe that she was actually shot, sparking a discussion about society’s apparent inability to believe or support Black women.

Others, however, are using the shooting as a positive affirmation of her award. “Did Lil Baby get shot in both feet and twerk 2 weeks later? I don’t think so,” one fan tweeted.

Baby hasn’t publicly commented on his defeat. However, he did retweet one comment about the Album of the Year.

Regardless of Baby’s personal opinions, it’s clear his fans are outraged.