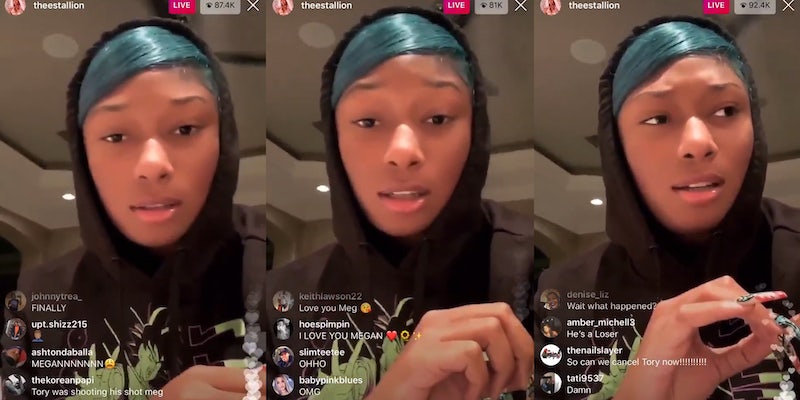 'You shot me, and you got your publicist and your people to [talk to] these blogs.'

Megan Thee Stallion claimed that rapper and singer Tory Lanez shot her during the infamous July 12 incident in Los Angeles, during an Instagram Live session on Thursday night. Now, she’s receiving sexist backlash for doing so.

“Yes, this n—a Tory shot me,” says the “WAP” rapper. “You shot me, and you got your publicist and your people to [talk to] these blogs, lying and shit. Stop lying!”

Megan had provided a warning before the Live session: “Lie one more time and ima quit sparing you.”

She later in the stream says that she did not inform law-enforcement officers that Lanez was the shooter out of fear of potential escalation, citing recent police violence.

“I didn’t tell the police nothing because I didn’t want us to get in no more trouble,” she continued.

The 25-year-old, born Megan Pete, revealed the incident’s circumstances in a slow stream of social media posts over the past few weeks. On Thursday, she posted photos of her injured foot on Instagram—to show proof of her being shot—but later deleted them.

On the night of the incident, Lanez, born Daystar Peterson, was arrested for possession of a concealed weapon. Megan and two other people were in the vehicle during the arrest, which had already taken place.

Lanez, his bodyguard, Megan, and a woman thought to be her close friend Kelsey Nicole attended a party at Kylie Jenner’s Hollywood home earlier in the evening. Nicole said in an Instagram post last month that she was present during the incident, but was not the shooter.

Police pulled over the four after a report of gunfire outside a second residence. An eyewitness described the SUV the four were traveling in. Initial reports stated the Houston native cut her feet on broken glass inside the vehicle. However, on July 15, she revealed she was shot, but would not identify the gunman, already widely suspected to be Lanez, who Megan was said to be dating.

Men on social media have also called her a snitch for spilling details. However, @tyviathisthugga points out that she did the opposite and did not speak to law enforcement, apparently because “she didn’t wanna send a black man to jail.”

Megan unraveled and challenged explanations made by naysayers, notably Lanez’s fans. Lanez, in Megan’s view, has perpetuated numerous non-truths about the incident, including the notion Megan assaulted the Canadian rapper.

“I tried to keep the situation off the internet but you draggin’ it,” Megan emphasized. “Motherfuckers [claiming that] I hit him—I never hit you! Motherfuckers are like, ‘She mad because he’s trying to fuck with Kylie [Jenner]’—no, I wasn’t.”

“There’s only four motherfuckers in the car: me, you, my homegirl, and your security—everybody in the car is arguing,” she proceeds. “I’m in the front seat, he’s in the back. I get out the car, I’m done arguing, I’m walking away.

“This n—a, from the backseat, starts shooting me! I didn’t get cut on no glass! Let me tell you why they saying that. There’s a witness, when the police came… this did not happen at Kylie’s house, this happened damn near back at the house I was staying at.”

“The police come, I’m scared (because) the police [have been] killing Black people for no reason. They were really aggressive, you think I’m about to tell the police that we n—as got a gun in the car?”

There’s also a sexist aspect, where Megan has been refused the full benefit of the doubt in a situation that left her shot. For example, on one tweet, @bigzimtf wrote: “not believing anything she say till we hear Tory side. way too one sided.”

@1Jimmybr0wn tweeted: “Who remembers when she said this tho and since all she is done is talk about it for the past month.” Completely out of context, the user noted lyrics in “Diamonds” from the Harley Quinn-centered DC movie Birds of Prey.

Additionally, the notion that Megan, as a Black woman, felt obligated to protect the Black man who shot her, has left many on social media in various emotional states.

The trouble isn’t over for Lanez: Los Angeles District Attorney’s Office confirmed that it has “asked law enforcement for further investigation before making a filing decision on a charge of felony assault with a semiautomatic firearm—personal use of a firearm, against Daystar Peterson.”