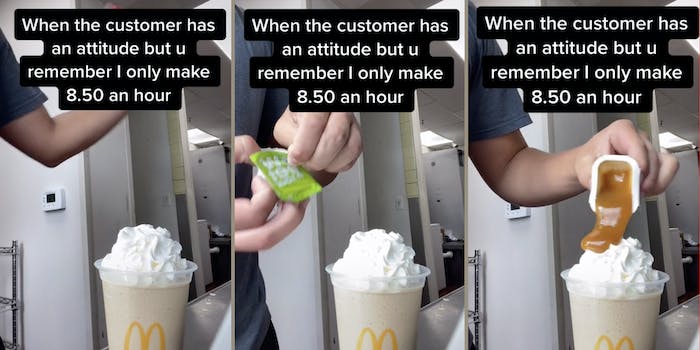 ‘You got yourself fired’: McDonald’s worker let go after pouring sweet and sour sauce in caramel frappé in viral TikTok

'When the customer has an attitude'

A McDonald’s employee swapped caramel for sweet and sour sauce in a drink as retaliation for a customer’s bad attitude. Now, they’re facing the consequences.

TikToker @mcdanksbitch’s viral video, which garnered over 63 million views and 7.6 million likes since posting Aug. 2, shows them making a caramel frappé at work and topping it with sweet and sour sauce (which resembles caramel).

The video is set to Lana Del Rey’s “jealous girl” and captioned, “When the customer has an attitude but u remember I only make [$]8.50 an hour.”

It’s unclear whether the customer actually received the drink or if it was thrown away. Most of the 102,000 comments expressed solidarity with the McDonald’s employee about the plight of fast food workers.

“Never mess with people that make your food,” says @babeoftheboonies.

Two weeks after the frappé video was posted, the employee posted another video of themself waving goodbye in front of a McDonald’s—because they were fired from the fast-food establishment.

Captioned, “Ladies and gentlemen you did it…,” @mcdanksbitch waves goodbye to McDonald’s before zooming in across the street to a Dunkin’ as the text flashes “So what’s next.”

Most of the 2,987 comments for the follow-up video said this was an inevitable conclusion after filming the frappé video.

“The second I saw you putting sweet and sour sauce in her drink I knew you were gonna get fired instantly,” says @_goyabeanx3.

There have been a number of instances of fast food workers going viral for pranks or “exposés,” often in relation to being overworked or treated poorly.

The Daily Dot reached out to McDonald’s and @mcdanksbitch for comment.