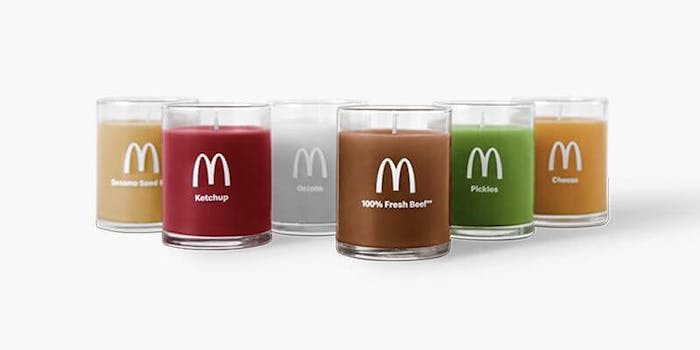 People are disturbed by these McDonald’s-scented candles

In what has to be the most bizarre marketing ploy yet, McDonald’s has released a set of candles that, when all burned together, reproduce the smell of a quarter-pounder with cheese.

The candles are part of the Quarter Pounder Fan Club, whose other offerings include mittens and an actual locket which has, somehow, already sold out —though whether people are genuinely wearing it as “a tangible way to publicly display their affection for the hot and deliciously juicy 100% fresh beef** Quarter Pounder” or just housing it in a modern-day cabinet of curiosities remains a mystery.

The five scents include ketchup, pickles, beef, cheese, sesame seed bun, and onion, the latter of which Twitter find particularly horrifying (and in some cases strangely appealing).

Strangely, there’s no French fry candle to go with them despite that being objectively more pleasant a smell than pickles or cheese. Twitter demanded answers, tweeting their desire for a fried potato candle at the McDonald’s social media account

There’s also a fair bit of outrage over the lack of a mustard-scented candle as well.

Despite this being the kind of weird publicity stunt that no one could possibly want to buy, there does actually seem to be a market for these things, with various tweeters expressing their excitement to have a set of burger candles of their very own.

Others are understandably appalled by the idea, pointing out how bad stale McDonald’s food smells.

And that this is not the future we were promised. Or wanted.

Eric Edlund created the McDonalds/Gwyneth Paltrow mashup nobody wanted with his suggestion of pairing them with the Goop vagina candle, letting you reminisce about your misspent youth and all the terrible dates you went on. And he’s not the only one whose mind instantly paired the two, proving that Twitter is indeed a cursed place.