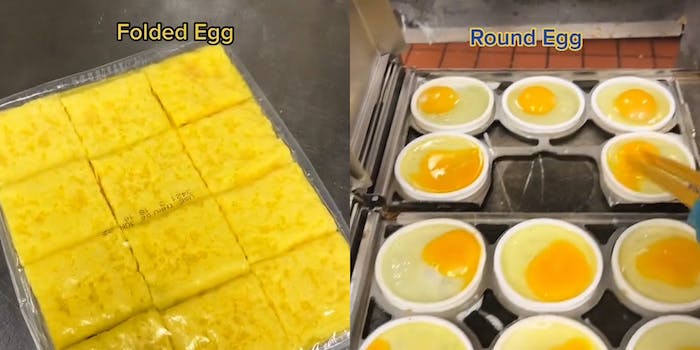 ‘I always sub for round eggs’: McDonald’s worker shows the difference between round and folded eggs in viral TikTok

The square 'folded eggs' are pre-made from a McDonald's 'liquid egg product.'

TikTokers are still hard at work exposing what happens behind the scenes at McDonald’s, and the latest revelation is all about eggs. Unsurprisingly, some McDonald’s eggs aren’t exactly fresh.

In a viral one-minute video, TikToker @essentialmcdonalds offered a first-person look at how different egg dishes are made at McDonald’s. “Round eggs” are good old-fashioned eggs made from scratch, cracked and cooked each day. Meanwhile the “square eggs” arrive pre-cooked in a plastic package. Then they’re grilled with a little water to keep them moist.

McDonald’s eggs are divisive because there’s an obvious difference between a freshly-cooked egg with a visible yolk (used on Egg McMuffins), and the artificial square shape of the folded eggs (used on bagels and biscuits).

The pre-made folded eggs come from a liquid egg mixture including preservatives, flavor enhancers and other additives. In his next TikTok, @essentialmcdonalds showed himself pouring liquid egg mixture out of a McDonald’s branded carton and scrambling it on the grill.

The original round versus square egg TikTok has now been viewed more than 7 million times, with commenters divided on which type of egg is better. Some people are definitely grossed out by the look of the square eggs.

“I always sub for round eggs,” wrote one commenter. “The folded eggs have the weirdest texture to me,” wrote another.

However other people pointed out that this is, after all, a fast food chain. No one goes to McDonald’s for farm-fresh ingredients, and other chains like Starbucks also serve pre-made egg dishes.

Also, there’s an upside to the folded eggs or liquid egg mixture: Less room for human error. “Still prefer the square ones,” commented another TikToker. “Too many times I’ve eaten eggshells.”

The Daily Dot has reached out to @essentialmcdonalds via TikTok comment.