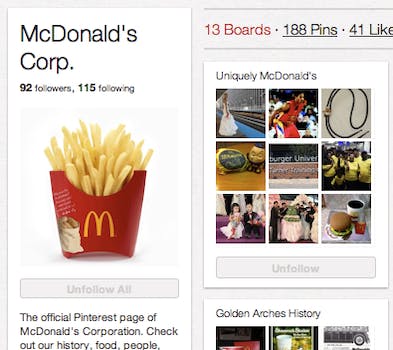 McDonald’s is full of surprises.

Last month on Twitter, the company inadvertently invited customers to share fast food horror stories, and after it flopped, tried the same thing the very next day.

McDonald’s is actually a little late to the game, considering more than 250 brands have joined Pinterest. That also means, however, it has a lot of examples to learn from. Here’s what McDonald’s did right, and what other brands should be doing, too:

We were tipped off to McDonald’s membership by one of our favorite Pinterest experts, #PinChat founder Kelly Lieberman. Lieberman repinned one of McDonald’s images, and immediately got a thank you from the brand manager. That interaction—plus the fact the company’s already followed over a hundred users—shows they’re willing to be a part of the Pinterest community.

The company pins a wide variety of subjects that educate and inform viewers about McDonald’s—this isn’t just a bunch of photos of burgers and fries. We would never otherwise have known about the company’s involvement with the Olympics or have realized that French McDonald’s carries macarons.  Sure, the Pinterest page is a promotional space, but there’s nothing in-your-office about the advertising.

McDonald’s didn’t pull a Starbucks and sign up for the service, then leave. It’s clear that the brand manager filled in every part of the Pinterest profile, connected it to Twitter, and continues to follow every user that follows the McDonald’s board (including this reporter.) Whether Pinterest is a fad or not, the company isn’t taking chances.

Here at the Daily Dot, we take a schadenfreude-filled interest in pointing out the shortcomings of brands as they try (and fail) at social media.

It’s nice to see one of them making good for a change.