No matter how many times people make a mockery out of corporate polls and contests on the internet, large companies insist on asking their audiences for input. Remember when the public voted for a Mountain Dew flavor called “Hitler Did Nothing Wrong?” Or the time Coca-Cola tweeted out passages from Mein Kampf?

“Ron’s Creamy Surprise” was just one of many horrors produced by McDonald’s New Zealand’s “Create Your Taste” competition, where the nausea people could cause was limited only by their imaginations.

McDonald’s had to cancel the contest after it was thoroughly abused by people who created burgers like “Toddler Bodybag” and “Rektal Prolapse.”

Dorkly has a great roundup of the most unappetizing contest creations, and I encourage you to check them out at the first convenient non-mealtime, but this one really says it all: 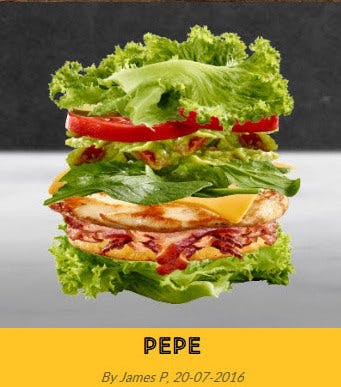 Because no force on earth—not Hitler, not even Ron’s Creamy Surprise—is apparently enough to sway companies from holding online contests, these marketing Hindenburgs (Hindenburgers?) are just going to keep happening. And those of us who aren’t in corporate PR can just chill out and enjoy them.