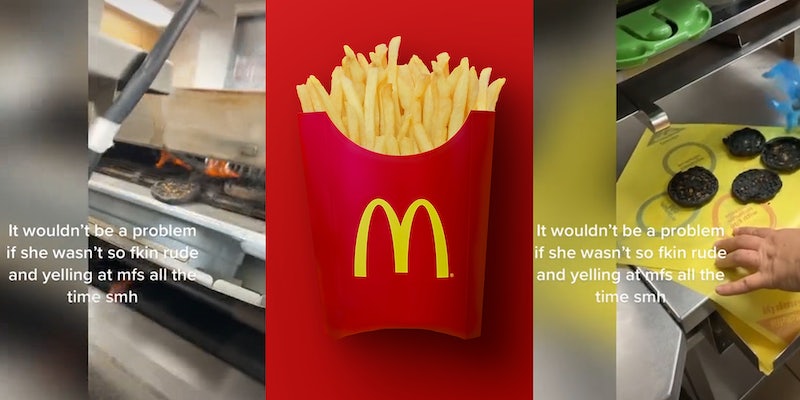 ‘Every weekend we go through this, bro’: McDonald’s worker puts regular’s ‘disgusting’ McGriddle order on blast

A McDonald’s employee who posts under the TikTok handle @bankedupdee went viral on the popular social media platform after showing a customer’s “disgusting” order. According to the video, the Mickey D’s patron wanted her food run through the toaster several times, resulting in a thoroughly charred meal.

To the incredulity of the fast-food worker, even after burning the food items, the customer allegedly sent it back, requesting it be toasted even further.

“This lady comes through every weekend talking about she wants it ran through the toaster three fucking times. My kitchen is literally on fire, bro,” the worker says. “Every weekend we go through this bro. What the fuck.”

At this point in the clip, another employee holds multiple scorched items of food. “And y’all talking shit, saying that I was doing that because I don’t know how to cook. No, she asked us for it that way,” the worker says.

The worker starts assembling the meal. “Ew, I just want to know what kind of teeth this bitch got, ’cause she got them dog teeth. Disgusting,” she says.

Someone shouts off-camera: “Hey your McGriddles are burning!”

She then smacks it against the metal food prep table, and the sandwich makes an audible sound. “How much more done can this shit fucking be?” she questions.

According to a text overlay that stays on the screen throughout the entirety of the 53-second clip, the McDonald’s employee states that the worst part about serving this particular customer is that she allegedly has a poor attitude with the restaurant’s staff. “It wouldn’t be a problem if she wasn’t so fkin rude and yelling at mfs all the time smh,” it reads.

TikTokers were shocked at the woman’s request and many shared their own horror experiences dealing with “bizarre” order customizations.

“Istg when I worked at Little Cesar’s I had a lady like that..sent the pizza back 4 times cause it wasn’t done or it was too done,” one said.

“When I worked at subway a customer would also asked for his bread to be almost burnt,” another wrote.

“When I worked at dominoes I had a older couple come in and wanted their pizza triple toasted, it literally would come out the oven like charcoal,” a third claimed.

Other TikTok users offered up examples of some responses they could use on the customer.

“I would simply tell them ‘I’m sorry we can’t meet your expectations maybe a another restaurant would be a better fit for you,'” another wrote.

And then there were those who believe the video has to be a joke, but @bankedupdee reassured them that it’s not. She said the customer is a very real repeat offender.

The Daily Dot has reached out to @bankedupdee via TikTok comment and McDonald’s via email.