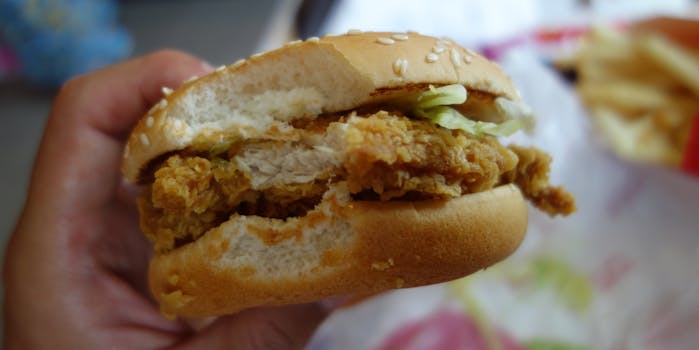 The video is obviously NSFW.

McDonald’s delicious McChicken sandwich is best known for its delectable spicy kick, being the perfect drunchies treat, and its low, low price of just over a dollar. But you’ll never see one the same way again thanks the devious misdeeds of one man.

Some dude posted a video of him fucking a McChicken, and of course, everyone’s flipping out.

The video looks to have originally been uploaded to YouTube, but it has made its way to various other networks as a way to preserve the NSFW moment. If you’re really interested in watching it, you can do some searching around Twitter on the McChicken hashtag.

For those not brave enough to watch the video, here’s the gist: The dude’s dick is sticking out of his shorts and clasped between the top and bottom of the McChicken. You can see the wrapper laying on the bed along with a little piece of the lettuce served on the sandwich. McChicken Fucker thrusts his manhood forward and back through the McDonald’s classic.

As of Monday morning, people have a lot of feelings (mostly disgusted) about the video. Even celebrities have viewed the XXX-rated food appreciation and chimed in.

I really hope that Sausage Party in no way inspired this #McChicken thing.

I wanted a mcchicken but u all fucked it up with that video. It'll now take me 6 days to forget and order it again.

When you see the #McChicken video. pic.twitter.com/c6NzOWtd6P

"YOUR TOTAL WILL BE $1.07 AT THE LAST WINDOW" #MCCHICKEN pic.twitter.com/DNEA00XfpN

Back in 2014, another brave soul stuck his penis in a Hot Pocket and Pop Tarts box. He is now remembered as Twitter folk hero Thot Pocket.

To be honest, I’m curious what went into the McChicken Fucker’s decision-making process. Sure, there’s plenty of mayo on the buns for some fine lubrication. But typically the McChicken’s chicken patty has a crispy outside exterior. A Big Mac would’ve been an interesting burger to screw since it has so many layers, but maybe the dude only had a single dollar bill and change when he got up to the counter, which left with only a few of the cheaper options on the McDonald’s menu to take back home with him.

Ill-choice or not, this McChicken Fucker is surely on his way to Thot Pocket legacy. May we rejoice in all the fine wonders that the internet cooks up for us.