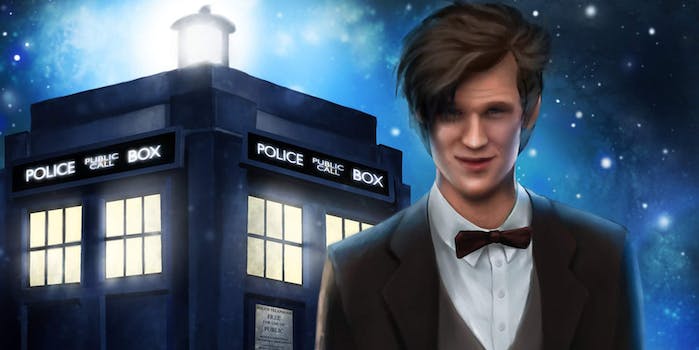 The Eleventh Doctor thinks the social network encourages netizens to create “surrogate versions of ourselves.” Whoa.

The Eleventh Doctor Who may be a hit with sci-fi fans around the globe, but Matt Smith probably isn’t a hit with Facebook right now. He told TechWeekEurope that he thinks the social network encourages netizens to create “surrogate versions of ourselves.”

Smith, who is soon to depart the hit BBC show after three years as Eleven, told the journal that his favorite technological invention was not, alas, the Sonic Screwdriver, but the portable mp3 player. “But,” he adds, “recently, the blender has been a big part of my life.” He also seems to be a big fan of time travel, which is only fitting for a floppy-haired alien who’s spent the last three years traveling through time and space together—at least on camera.

Yet even though he’s a fan of technology, he’s not so much a fan of social media. Smith told the journal that while he admires the tech skills of kids who’ve grown up with the Internet, he worries about what spending all their time in a digital world is really teaching them:

[I]t worries me that nowadays kids go home from school and socialise on Facebook. I think we create these surrogate versions of ourselves on Facebook, the celebrity versions with the best pictures, and the best comments, and the best friends.

And that weird thing on Twitter, comparing follower numbers. It’s like you’re quantified by the number. Both Twitter and Facebook can be very useful and practical. I see their value, but it’s just not for me.

Sounds like the Doctor is out as far as Twitter’s concerned. But given that the 30-year-old Smith likes to stay close to fans, maybe he just needs to try a different social media experience.

After all, on Tumblr, the only person’s follow count you can see are your own.

How about it, Eleven? Most of the snazzy Doctor Who handles are already taken, but timetravelingmattsmith.tumblr.com is available.