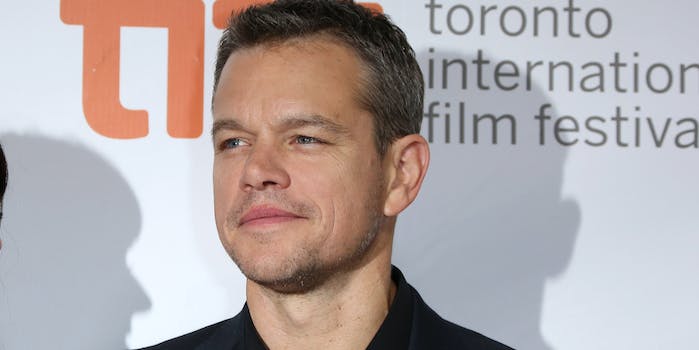 'I made a joke, months ago, and got a treatise from my daughter.'

Matt Damon revealed that he recently stopped using a gay slur after his daughter called him out on it, which resulted in a wave of backlash for taking so long to stop using it.

Damon is at the center of a Sunday Times profile that explores the changing landscape of movies and the idea that Damon is one of the last true Hollywood leading men. The profile already garnered some controversy for writer Jonathan Dean’s suggestion that anyone could’ve played Iron Man because people were invested in the character over Robert Downey Jr. But the other controversial moment arrived at the end of the profile with what Dean describes as “exactly the sort of anecdote people make headlines about,” relayed within the context of how modern masculinity has changed.

According to Damon himself, he only stopped using a gay slur months ago after, when he made a joke, his daughter got upset over it.

“The word that my daughter calls the ‘f-slur for a homosexual’ was commonly used when I was a kid, with a different application,” Damon told the Sunday Times. “I made a joke, months ago, and got a treatise from my daughter. She left the table. I said, ‘Come on, that’s a joke! I say it in the movie Stuck on You!’ She went to her room and wrote a very long, beautiful treatise on how that word is dangerous. I said, ‘I retire the f-slur!’ I understood.”

It’s the kind of story that’s meant to humanize Damon, and Dean contextualized Damon’s quotes by noting that being open about his use of homophobic language makes him “a human, not a billboard.”

However, as many online did, Damon’s story can be viewed in a different way—and one that makes him come off worse: That until recently Damon, a 50-year-old man, somehow thought it was still perfectly OK to use a homophobic slur.

Others wondered why Damon would willingly offer an anecdote that will make him look bad in an attempt to make himself look progressive.

And of course, people made memes at his expense.

It’s far from the first time Damon has put his foot in his mouth. He once tried to explain diversity to Effie Brown, a Black producer and director, on the show Project Greenlight. He was also widely derided for his statements around the Me Too movement and sexual harassment in the wake of several reports about Harvey Weinstein in 2017. And while it didn’t stop him from divulging a story about his recent use of homophobic language, he is, in some regards, at least somewhat aware of how his comments will spread.

“Twenty years ago, the best way I can put it is that the journalist listened to the music more than the lyrics [of an interview],” he explained. “Now your lyrics are getting parsed, to pull them out of context and get the best headline possible. Everyone needs clicks. Before it didn’t really matter what I said, because it didn’t make the news. But maybe this shift is a good thing. So I shut the f*** up more.”