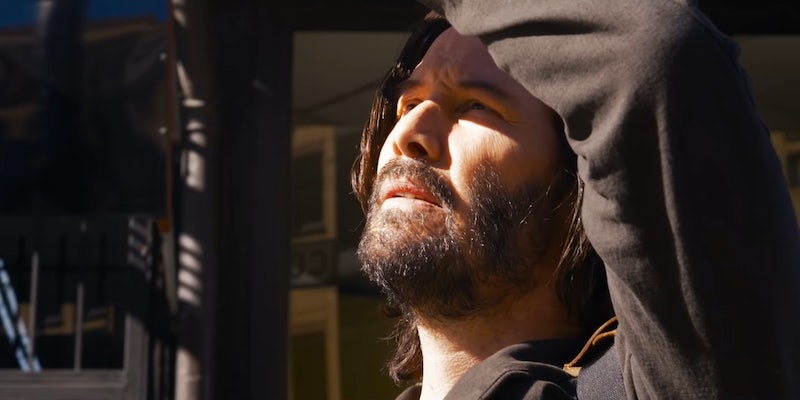 The ‘Matrix Resurrections’ trailer looks very different from ‘The Matrix,’ and that’s a good thing

The new trailer is a thrilling departure from the original film's cyberpunk aesthetic.

Hollywood is obsessed with nostalgic revivals at the moment, with films like Blade Runner 2049 and Ghostbusters: Afterlife trying to recapture the magic of beloved classics. They rely heavily on callbacks to decades-old imagery, without attempting many new ideas. So it’s very exciting to see The Matrix Resurrections go in a different direction, with a trailer that departs drastically from the original trilogy.

The Wachowskis have evolved a lot in the 18 years since the last Matrix movie. From the first shot of the Resurrections trailer, we see echoes of Lana Wachowski’s work on films like Cloud Atlas and Jupiter Ascending. The Matrix returns with a crisp, clear exterior shot of a wealthy neighborhood. This segues into a scene where Thomas Anderson (Keanu Reeves) speaks to a therapist (Neil Patrick Harris), whose bright blue glasses remind us of The Matrix‘s famous blue pill. Gone is the low-rent greyscale dystopia of Thomas’ Gen-X youth. In fact, this trailer is more colorful than most contemporary blockbusters.

The story here is simple yet intriguing: Thomas Anderson is back inside the Matrix, with no memory of his life as Neo. He dreams of the “real” world, which he believes to be a delusion, medicated by blue pills. Later he meets Trinity (Carrie-Anne Moss) in a coffee shop and is recruited by characters resembling Morpheus and his team. On paper, this suggests a rehash of Neo’s origin story; a familiar kind of Hollywood revival. But in practice, this trailer is dominated by stylistic upheaval.

Influenced by anime and Hong Kong martial arts movies, the original Matrix is a cyberpunk icon. It popularized a specific style of fetish-influenced costume design and influenced numerous sci-fi/action movies of the past 20 years. But that trademark cyberpunk aesthetic—particularly The Matrix‘s green/black color scheme—is mostly gone from The Matrix Resurrections trailer.

The Resurrections color palette is far more varied, with a particular emphasis on blue: the pills, the therapist’s glasses, Jessica Henwick’s hair, the washed-out tone of Thomas Anderson’s bathroom. Red (the color we associate with the pill that frees Neo’s mind from the Matrix) appears sparingly.

There are several luminous sunset shots, echoing a Jupiter Ascending action sequence that the Wachowskis filmed in natural pre-dawn light. Resurrections clearly recognizes that times have moved on—not just for its middle-aged heroes, but for Hollywood cinema. After 20 years of action films that tried to copy The Matrix by filming everything in the dark, The Matrix Resurrections is full of sun.

Despite the various Matrix callbacks (the pills, the white rabbit, Yahya Abdul-Mateen II’s Morpheus glasses), Lana Wachowski is taking pains not to rely on old material. She knows that PVC-clad hackers are a retro relic of the 1990s. This is a filmmaker whose last major project was the riotously queer, divisively strange Netflix series Sense8. She wouldn’t have returned to The Matrix if Warner Bros. didn’t let her do what she wanted.