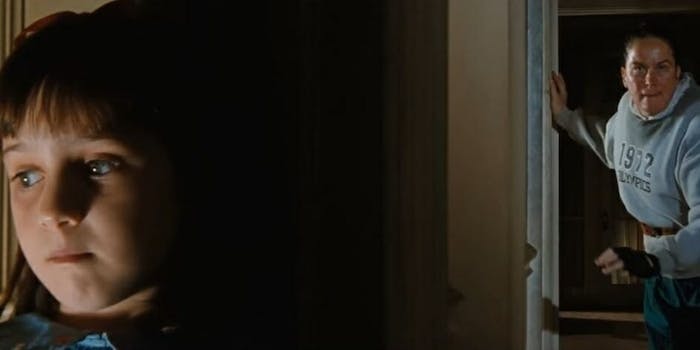 Thirty years after Matilda stood up to her despicable school headmistress in Roald Dahl’s classic children’s book, she has a new foe. And she’s proving that the U.S. president is no match for her, either.

CNN reports that to celebrate the 30th anniversary of one of Dahl’s most famous works, a statue of Matilda eyeing Donald Trump has been erected near Dahl’s former home in Buckinghamshire, England.

The responses to the statues are glorious.

LOOK: To celebrate 30 years since Welsh author Roald Dahl's book 'Matilda' was published, a statue of her staring down President @realDonaldTrump has been unveiled near where the author used to live in #Buckinghamshire #CapitalReports pic.twitter.com/YlqhUoplzG

A statue of Roald Dahl's Matilda staring down Donald Trump has been unveiled near the author's old home in Great Missenden in Bucks – to celebrate the book's 30th anniversary #Matilda30 #HeartNews pic.twitter.com/VH3GXXoOtL

Matilda is a delightful book for all grades.

Her wit + intelligence defeat the Trunchbull…and well, her current nemesis has no idea what he’s up against.

In the novel—and the subsequent movie, starring Danny DeVito and Rhea Perlman, and the Broadway show that earned five Tony Awards—5-year-old Matilda overcomes her parents’ disinterest and the reign of terror caused by her headmistress, Agatha Trunchbull, by using her extraordinary telekinesis powers.

Not everybody was pleased, though, with bringing 2018’s problems into Matilda’s world.

You’ve ruined it. No way Matilda would be a die hard dem. She’d be an independent thinker. She wouldn’t get caught up in performative liberalism. However, I do agree that she’d dedicate her life to helping children.

Leading up to the anniversary, the Roald Dahl Story Company created a poll that asked fans to vote on the person who Matilda would most likely face off against today. As the Independent notes, Trump won the popular vote with 42 percent, beating out British Prime Minister Theresa May and TV personality Piers Morgan. That’s why the statues of Trump and Matilda were created.

“Matilda demonstrates that it’s possible for anyone, no matter how small and powerless they feel, to defeat the Trunchbulls in their own lives—a message that feels even more relevant today than it did 30 years ago,” Bernie Hall of the Roald Dahl Story Company said, via the Independent.

So, why was Trump the most popular choice?

“Female rage has always been quite a big taboo, but what Matilda shows is if you channel it effectively it can be a hugely important agent of protest,” Susie Dent, a lexicographer who helped create the project, told CNN.  “… Trump was voted the most likely person that she would stand up to, and I’m assuming that people saw in him similar traits to Miss Trunchbull.”