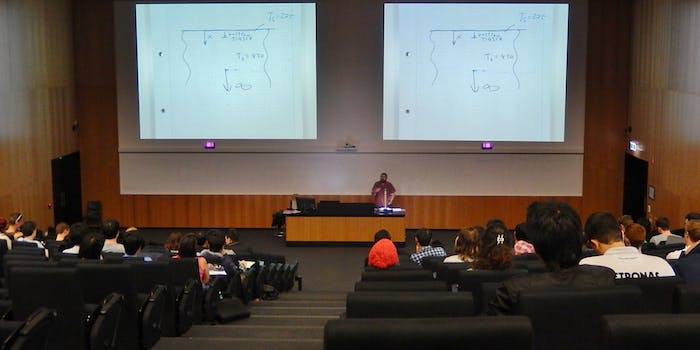 It’s been a banner week for math teachers online. First, a handsome lecturer at the University College London captured the Web’s heart after students discovered that he doubled as a male model. Now, a math professor at California’s Biola University has everyone’s attention.

It was Matthew Weather’s April Fools’ gag that started things. On Thursday, the math and computer science professor posted a video on YouTube that shows him concluding class by showing students where they can reference one of his lectures online.

After pressing play, Weathers becomes embarrassed when he realizes his video self is getting some fundamental trigonometry wrong. But his video self won’t stand to be corrected and begins to pick a fight with the professor. The whole thing unravels into an altercation that defies reality, as the virtual professor begins assaulting the real one.

Since posting the video online, it’s gone viral, storming the front page of Reddit and amassing millions of views. The professor took to the site to answer a few questions from curious redditors and spoke about how he created the amazing gag.

Using both Adobe Premier and After Effects the professor was able to create the clip, though he credits a fellow film professor for providing additional help. “I practiced about 20 times to get the timing right,” Weathers wrote. “I think learning is really fun, and if I can convey my excitement for learning to my students, I’m happy.”