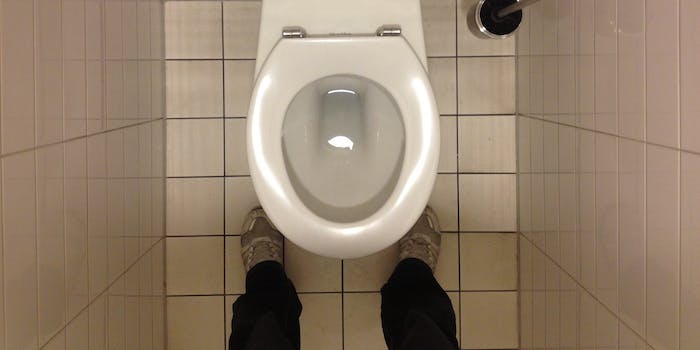 A NSFW story about not being safe at work.

That’s what this guy who, rather appropriately, goes by ohnoes12345 on Reddit, learned when his girlfriend decided to send him a sexy picture in the middle of the day.

To begin, I masturbated at work. Yup, don’t blame me.

My girlfriend decided that sending me an exposed picture of herself was a good idea. Like any other straight man, a naked picture of your SO gets you a tad frisky. In combination with the animal urge I also needed a shit so thought I could kill two birds with one stone.

The bathroom I went to has two cubicles and three urinals. I take my seat in the first cubicle and when the coast is clear, do my business. I. SPUNKED. A LOT. I’m not talking your ickle dribble, I’m talking volcanic eruption. I cleaned up as best as I could and buttoned up my trousers. As I was leaving and washing my hands I passed one of my senior managers, a nice bloke but stern. We greet each other as we pass and I walk off, checking my phone until he rushes back out of the bathroom and says to me with no subtlety whatsoever, “WHAT IS THAT MESS?”

I freeze and accompany him as he walks me back into the toilet and asks which cubicle I was in. I realised I could get out of the sticky situation and replied that I was in the second cubicle.
He drags me to the second cubicle where someone had previously been and had there was smeared shit on the toilet ring with a puddle of piss on the floor.

Wow, thanks for describing your ejaculation so poetically pal, and your story has shit in it? Perfect. Maybe the lesson here is that honesty really is the best policy.