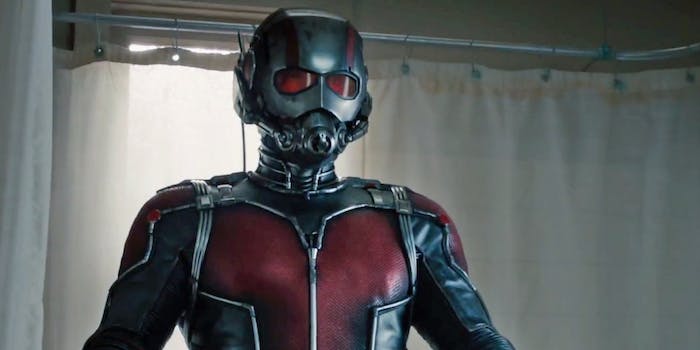 Nothing is worse than a missed opportunity for a good joke.

It’s that time of the year again. No, it’s far too early for Christmas, and a little too late for New Year’s. Instead, it’s Marvel trailer time!

Following the showstopping, James Spadery trailer for The Avengers: Age of Ultron that was released in October, Marvel has just dropped the official (non-ant size) trailer for Ant-Man, which will arrive in theaters this July. The majority of the clip plays like the most serious thing in the world. It’s got eerie music, Michael Douglas doing his most dramatic narrator voice, and a general “this is the end of the world” vibe to it. Until Douglas tells Paul Rudd’s Scott Lang, “I need you to be the Ant-Man,” to which Lang replies, “Huh.” Then the trailer returns to its initial dire seriousness, until the end, when Rudd asks, “One question, is it too late to change the name?”, right before the title “Ant-Man” emerges, dominating the whole screen.

In general, what’s interesting about the trailer is how the moments of humor feel almost at odds with the rest of it. This is probably intentional—most action movie trailers have a few buttons of humor. But with Ant-Man, the little humor that is there opens up several interesting questions: What kind of movie will this be? What will it mean for the future of Marvel? And, most importantly, has Ant-Man learned anything from the success of Guardians of Galaxy?

The Ant-Man trailer is a clever fake out in some ways—the dour, stone-faced expressions of everybody else in the trailer is punctuated by Rudd’s goofy delivery. And of course, there’s the irony of the “Is it too late to change the name?” inquiry right before the title appears in big, bold letters (a cheeky poster that was just released is actually quite clever, too). Most fortunately, the trailer showcases some of Rudd’s natural comedic talent (but just enough to offset the rest of the images), and it at least acknowledges the silliness of the whole thing.

This is a superhero movie based on a character whose power is basically to shrink himself down and converse with insects, not exactly the most badass ability of all time. In fact, as far as superpowers go, it’s probably just a notch above Hawkeye’s “I’m really good at shooting arrows” thing.

At one point, SNL even made fun of Hawkeye’s aforementioned limitations, though in a much better sketch earlier this year about how “Marvel can’t fail,” they pointed out that the studio “took an obscure comic book, and turned it into the biggest movie of the year.” They also brought up the point of how Ant-Man is basically about “a guy who talks to ants.”

These interpretations may be somewhat glib, but they underscore a certain truth, which is that Marvel’s brand has become so trusted, moviegoers will go along with virtually whatever product they choose to put into the marketplace next. However, last summer’s Guardians of the Galaxy was such a giant leap forward for that brand, it has now brought Marvel to a crossroads in determining where they’ll go next.

Part of Guardians’ appeal was undoubtedly that it felt new. As it turned out, taking an obscure comic book with characters nobody had ever heard of and making it the next giant entry in their larger franchise was about as smart a thing as Marvel could’ve done. Though it may have looked like a gamble from the outside, Guardians’ success proved that to build a compelling universe, you also have to add to and change that universe, and keep people guessing as to what they’ll see next. Working off that principle, Guardians brought us a space opera that felt like Flash Gordon meets The Avengers. Or, as Variety’s Scott Foundas put it in his review, “If the wayward denizens of Star Wars’ Mos Eisley Cantina rose up and demanded their own starring vehicle, it would probably look something like Guardians of the Galaxy.”

But the other reason Guardians ended up being the highest grossing film of the year domestically, besides its original pastiche of styles, was that it didn’t take itself too seriously. Remember, if you think Ant-Man sounds ridiculous, Guardians features a talking raccoon who has a giant, walking tree for a bodyguard. Rather than trying to legitimize its silliness though, Guardians embraced it. That’s not to say that by the end of the film, you hadn’t come to care for the characters, but Guardians was also smart enough to acknowledge how absurd it was from the beginning. From its pervasive, cheesy soundtrack, to Peter “Starlord” Quill’s blacklight joke, to the Howard the Duck credits scene, this movie wasn’t just accidentally ridiculous, it was actively so.

The entire feat of Guardians is probably best summed up in the movie’s climax, wherein villain Ronan the Accuser (Lee Pace) is challenged to a dance-off by Quill (played to a tee by Chris Pratt, another natural comedian). Unfortunately, like many Marvel villains, Ronan is so boring, generic, and supremely unscary that seeing him taken down a notch this way, by having the film’s lead character treat him so nonchalantly, was really the only way to make the ending even remotely surprising. And in that moment of pure hilarity, it was.

Granted, Marvel has always been pretty good at balancing action with humor. This was especially true in The Avengers, thanks largely to the work of ever-witty writer/director Joss Whedon (wasn’t the shawarma scene kind of the best part of the whole movie?). The Ultron trailer, meanwhile, wasn’t so funny, but one hopes that Whedon’s trusty quips will be lying in wait when the actual film comes out.

However, anytime Marvel departs from a more comedic approach to comic book movies, they seem to run into issues. Earlier pre-Disney efforts especially, like Daredevil, The Punisher, Fantastic Four, Elektra, the Nicolas Cage-starring Ghost Rider films, and Ang Lee’s awful Hulk, are all either too humorless or are more unintentionally ludicrous than outright funny.

Thanks in large part to the charisma of Robert Downey Jr., the Marvel brand really started to take shape with the Iron Man films, though efforts like the Edward Norton vehicle The Incredible Hulk, which came out the same year as the original Iron Man, still didn’t get the formula down quite right. And even the more serious moments of the Thor and Captain America films still tend to get a bit boring (here’s looking at you, evil elf from The Dark World).

Still, these efforts were far better than Sony’s not-so-amazing Amazing Spider-Man series, which has pretty much sucked all the humor and pathos of Sam Raimi’s original Spider-Man trilogy. And then there’s Man of Steel, a superhero movie so incredibly unfunny, it was no surprise when reports from earlier this year revealed that Warner Brothers was intentionally going for a less comedic, more “serious brand.” And in all fairness to Warner Brothers, “serious” served them well with Christopher Nolan’s Dark Knight trilogy. But in a post-Guardians world, humorless isn’t necessarily the best road to take.

This brings us back to Ant-Man—because again, Ant-Man looks ridiculous. What kind of ridiculous, however, remains to be seen. When Edgar Wright, the comedic mastermind behind such films as Scott Pilgrim vs. the World and the “Three Flavors Cornetto trilogy,” exited as the film’s director last May, it looked as if Ant-Man was in jeopardy of veering into the wrong kind of ridiculous, as opposed to the self-aware kind that was perfected by Guardians. Now, Wright only retains a story credit, though since Rudd and Will Ferrell collaborator Adam McKay took over the script, there at least seems a chance it’ll have some decent comedic moments.

The problem is that right now, based on the first trailer, it looks like Ant-Man could go either way. The Atlantic’s David Sims summed up this internal conflict best. He wrote, “What’s especially strange about this turn of events is that Marvel enjoyed such success last year with Guardians of the Galaxy… which was presented with a real sense of playfulness… With Ant-Man, it’s sadly pretty easy to guess the story parameters from one minute and 48 seconds of footage: there’s an old scientist, a magic suit, a down-on-his luck hero (with a daughter, for some emotional stakes), an evil-looking industrialist, and a butt-kicking love interest. Shake-and-bake for instant heroics.”

In addition, Sims notes that, “Guardians was also the most visually distinctive Marvel movie to date,” and that Ant-Man probably missed out on the chance of having its own distinct style, when Wright, known for his masterful visual comedy, left the project.

And yet, those few hints of levity in the Ant-Man trailer suggest that maybe, just maybe, the film will follow in Guardians’ footsteps after all. For now, one might compare the Ant-Man trailer to the new Jurassic World trailer, which is an otherwise interesting clip, save for a notably unfunny Chris Pratt. Let’s hope that Pratt gets to be funny in Jurassic World, and Rudd gets to be funny in Ant-Man. Because in the serious business of Hollywood blockbusters, nothing is worse than a missed opportunity for a joke.