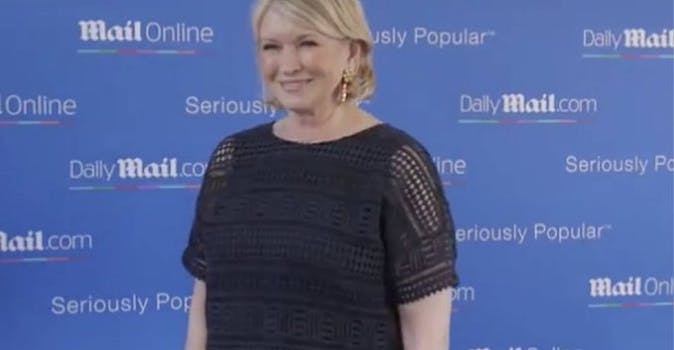 Why did Martha Stewart just obliterate Jonathan Cheban on Twitter?

Domestic deity and reformed criminal Martha Stewart, at age 74, exhibits the kind of effortless sense of humor that younger celebrity tryhards can only dream of. And today, for some reason, she unleashed it on Kim Kardashian‘s annoying “BFF,” self-proclaimed “food god” Jonathan Cheban.

#seriouslypopular @DailyMail @MailOnline do you know this guy?? He says he is well known pic.twitter.com/9jGJSxz2oV

Cheban sometimes appears on Keeping Up with the Kardashians and was briefly a contestant on the U.K.’s Celebrity Big Brother. He’s an active poster of food and selfies on social media, and also runs something called TheDishh.com(sp?). Yeah, you got me. ¯_(ツ)_/¯

Anyway, Martha has caused a minor sensation by going in on this other human being, particularly because no one seems to know why she did it.

Perhaps something went down in Cannes, where the famous celebrity and the other guy were both just seen on the Daily Mail’s MailOnline yacht. Cheban was there Tuesday night after an extended Twitter whine about the airline losing his luggage, which included a one-of-a-kind pair of Kanye West’s Yeezy shoes.

Stewart is on the boat, too. She flew in after breaking the rules at a Hillary Clinton fundraiser Monday.

Perhaps the two crossed paths and Martha found it unpleasant, or perhaps she just saw a buffoon running around and was genuinely curious as to what he was doing there. Whatever the answer turns out to be, I’m certain it is delicious.

Cheban certainly hasn’t provided any clues, just this tweet limply insisting on his own fame:

RIP, whoever you are.

"Sam, why are you going home?"

"Martha Stewart just ethered Jonathan Cheban on Twitter and I need to take the rest of the day off."

Update 3:04pm, June 22: Martha has learned who Jonathan is, though still doesn’t seem all that impressed.

Better photo of jonathan who is very famous bff of the kardashians who knew! pic.twitter.com/3gYUs9tcWo

How did she figure this out? Well, journalism helped.

Why don't you ask @KimKardashian?